With those pesky lockdowns on their way out at last, it's time to get back out there amongst the many natural treasures that surround Sydney, the Central Coast, and Wollongong. Of the natural parks and wilderness areas throughout Australia, the Blue Mountains New South Wales is undoudgedly one of the best and brightest, and could hardly be easier to get to. This World Heritage listed mountain range is a vast network of tightly forested gorges and valleys, gently trickling streams, and awe inspiring towers of sandstone decorated with the vivid colours of millions of years of geological history.  Take a look beneath the dense canopy of the Blue Mountains rainforest, and you'll find a plethora of rare and distinctive wildlife living here as well as, in one particular corner of the range, a network of ancient and jaw dropping caverns. Of course, it’s not just the great outdoors that’s worth seeing up here in the hills. The Great Western Highway carves a trail along the high ridge lines of the Blue Mountains, with charming and storied townships nestled alongside it all the way from the foothills of the Nepean River to the plentiful valleys in the West. Instilled with the relaxed culture and mountain atmosphere that is synonomous with this region; there truly aren’t many parts of Australia more sought after to live in. It's all of this working together that makes the Blue Mountains so special, and there's never been a better time to find that out for yourself.

See the sights in the Blue Mountains, New South Wales

There are so many great ways to get out amongst the natural world here in the Blue Mountains, but let's start with the most simple; on your own two feet. There is a vast and comprehensive array of hiking trails that traverse the rugged terrain, offering wild and spectacular viewpoints and deep dives into the thick of the rainforest. For the newcomer it can seem too much to choose from, so we’ve picked a few of our absolute favourites to tell you about. First and most famously, The Three Sisters Walk is the perfect trail for families and beginners; a leisurely stroll that rewards you with the kind of views you’d expect to have to walk your legs off for. Starting from the iconic Echo Point in Katoomba, the track is an easy 45 minute return that snakes along the ridgeline right up toward the most iconic and enduring symbol of the Blue Mountains, The Three Sisters; a sandstone rock formation alien in appearance and set against a stunning backdrop. It also accesses the legendary 800 step ‘Giant Stairway’, but don’t worry, you’ll only have to descend a handful of them before arriving at the Honeymoon Bridge. This iconic metal bridge and lookout offers truly spectacular views of the valley below, and gives the visitors the chance to walk out and touch the first of the three sandstone pires that comprise the Three Sisters. 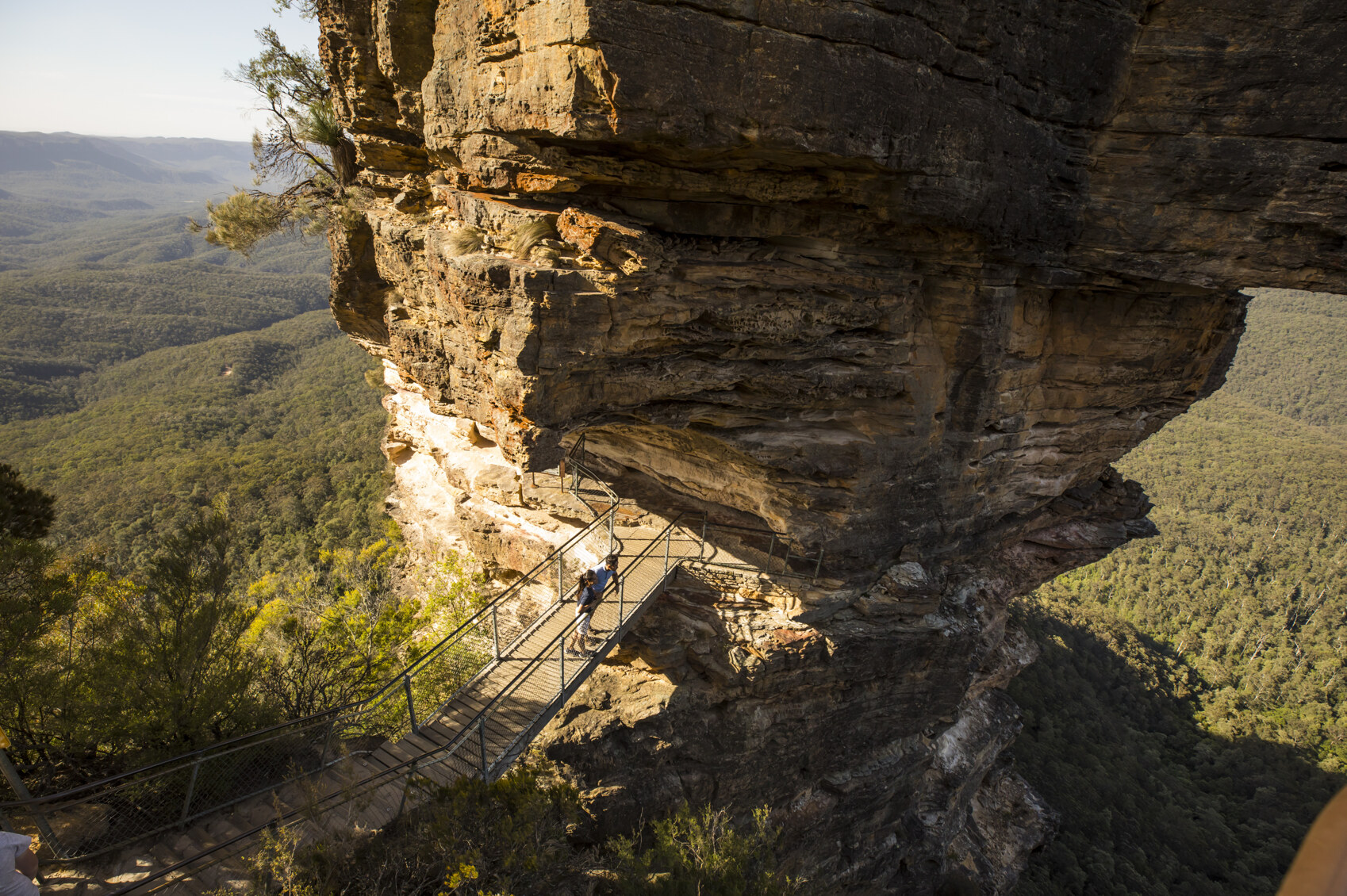 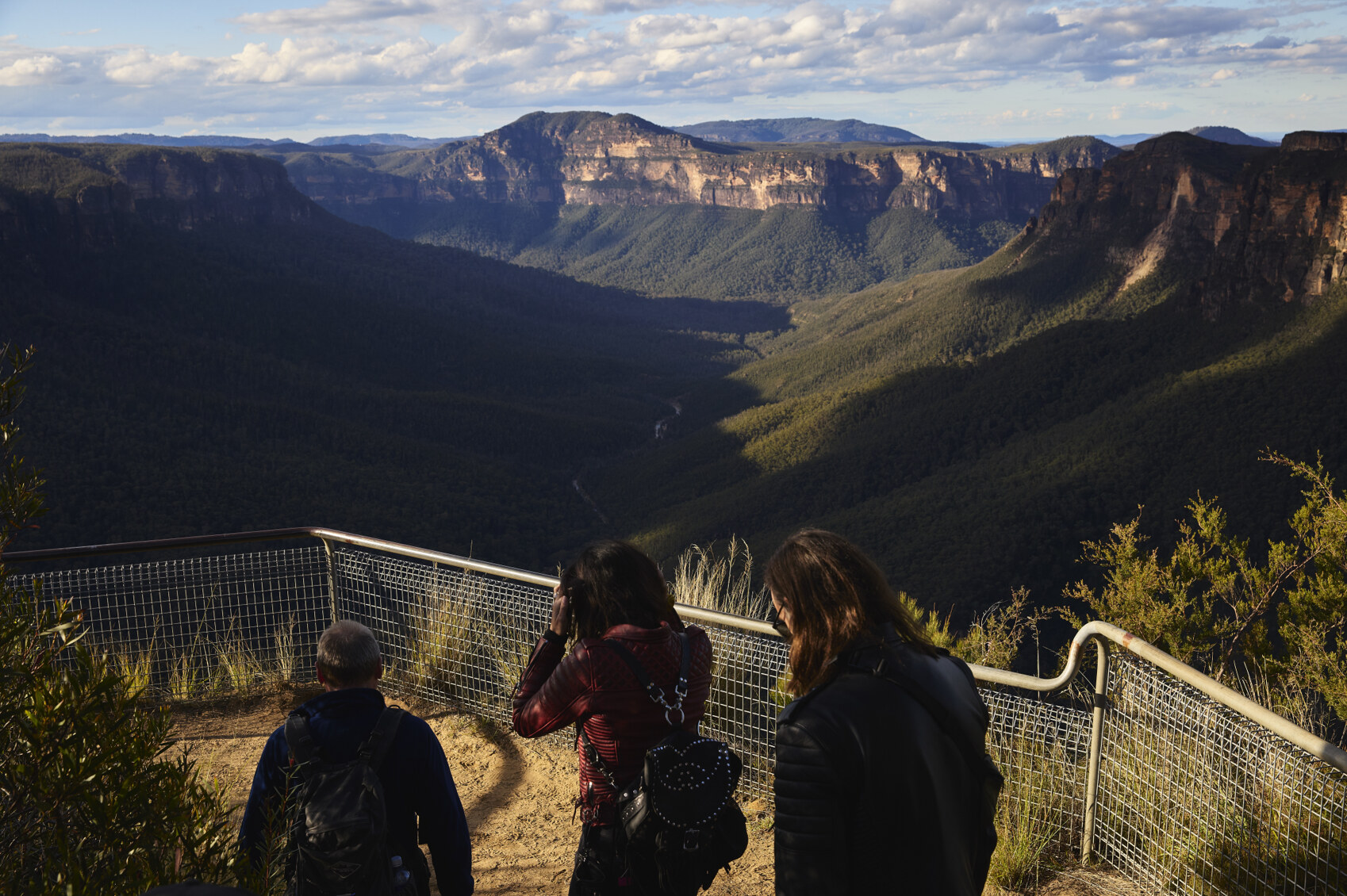 Another one of the most scenic trails in the Blue Mountains is also its oldest; The Grand Canyon Track in Blackheath. While the 6km loop is a little more on the challenging side, there's good reason that it has stayed one of the most popular hikes in the region after all this time. This trail plunges from heights of the town of Blackheath straight down toward the valley floor, where it snakes through thick vegetation alongside Greaves Creek. It's a deeply calming feeling; to be fully ensconsed in the lush greenery and impenetrable shade of the rainforest, but keep on pressing and you'll find yourself climbing the many stairs and precipices towards Evan's Lookout; one of the most breathtaking and far reaching viewpoints anywhere in the Blue Mountains.

Speaking of vistas, it's hard to imagine a better scenic destination than Scenic World in Katoomba. This unique complex consists of two cable cars; The 'Scenic Cableway' which ascends and descends over 500 metres from the cliffs edge to the valley floor, and the 'Scenic Skyway' which, in a true feet of engineering and a test of your guts, crosses the valley at its highest point from one end to the other, dangling over hundreds of metres of open air and giving riders an experience they'll never forget. If that wasn't enough to get your heart going, check out the 'Scenic Railway'; which during it's 310 metre descent is officially Guiness certified as holding the record for the steepest railway in the world with its mind boggling 52º slope. These are experiences that simply have no equivalent, in a dramatic and special landscape. Walking up to the edge of the plateau takes the breath away, as it seems the world just dissapears at your feet, and visitors here will discover that Scenic World is truly one of New South Wales' most impressive attractions. 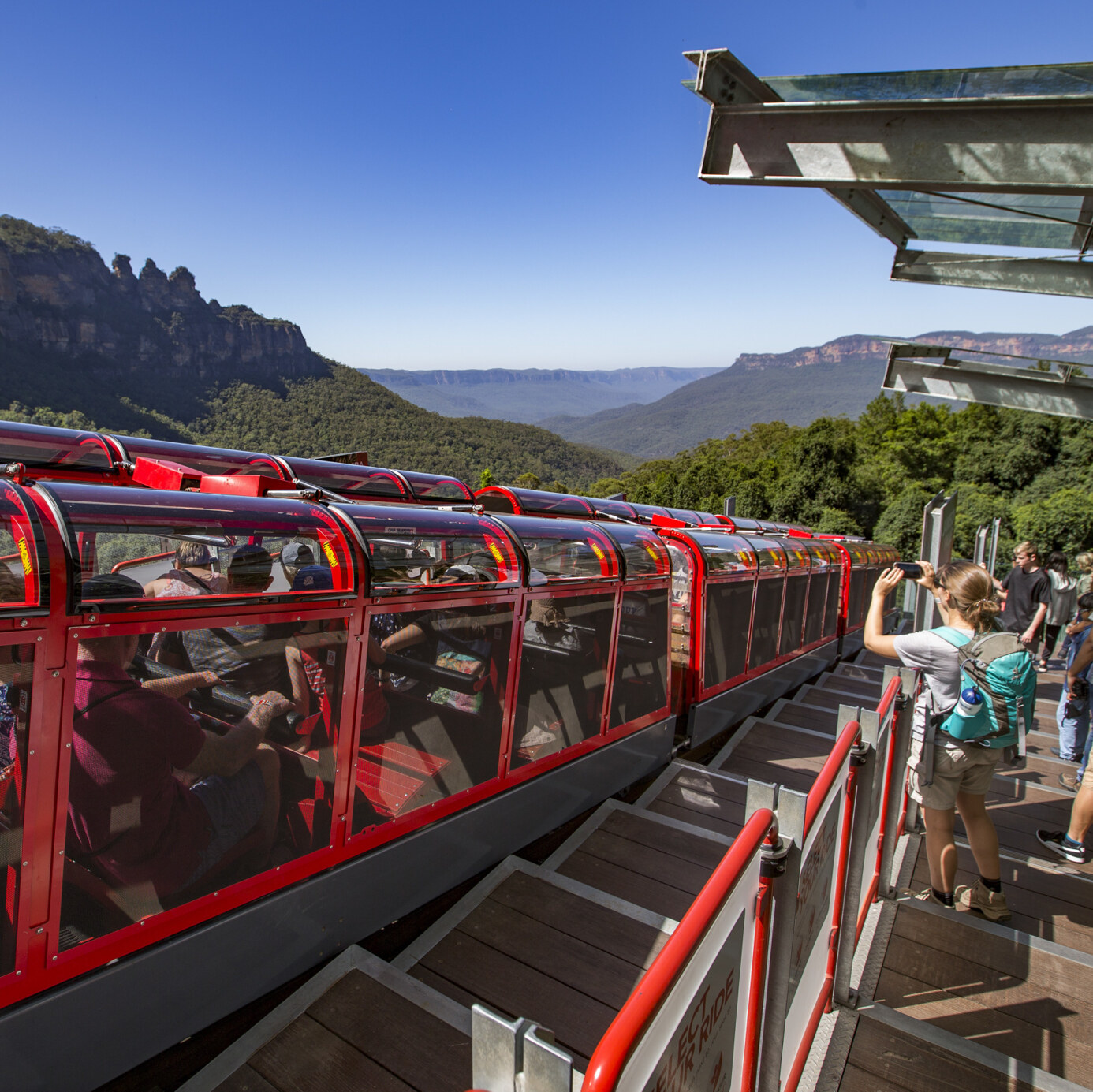 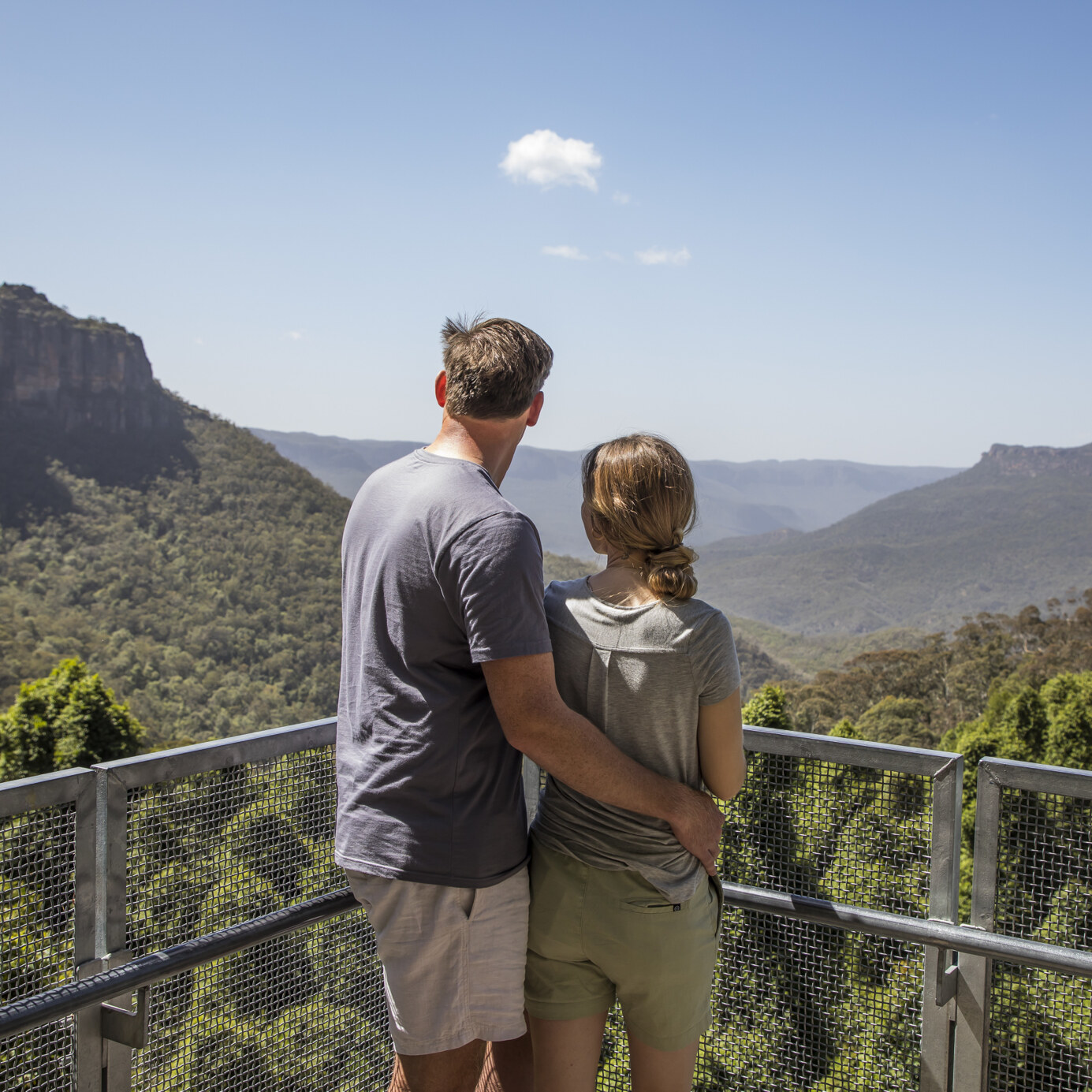 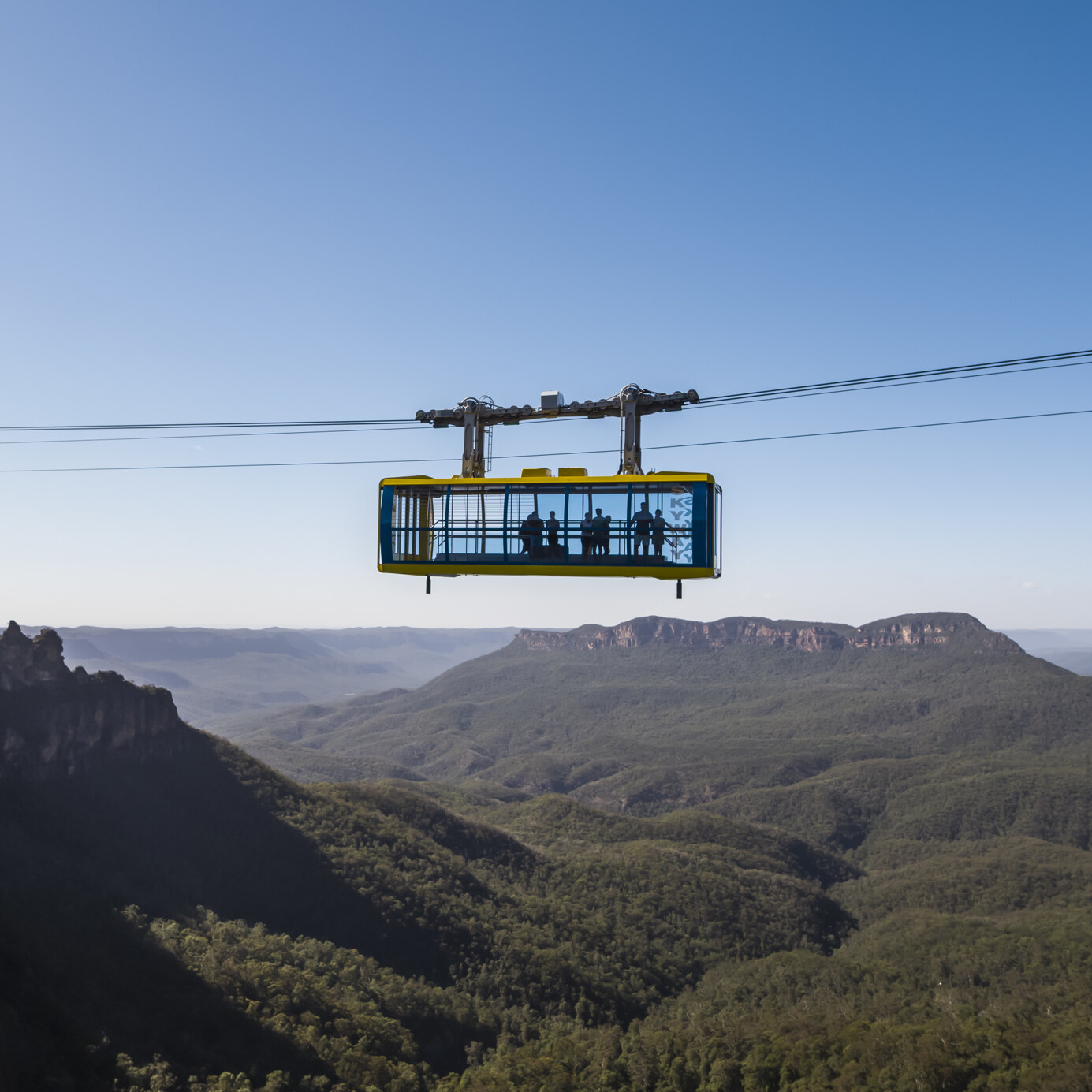 The Jenolan Caves: A world under the mountains

In the far West of the Blue Mountains, there is a network of narrow valleys that lies just to the North of the Kanangra-Boyd National Park. They may not look like much on first impression, but these valleys are home to one of the most strikingly beautiful systems of caverns in Australia; the Jenolan Caves. It holds one extroadinary record, confirmed by research conducted by the CSIRO in conjunction with the University of Sydney and the Australian Museum; the limestone and clay here dates back to 340 million years ago, making Jenolan the single oldest open cave system anywhere on planet Earth. Today the 16 unique and captivating underground chambers here make up one of the countries best cave destinations, with 11 of them having been thoroughly lit from the inside. Favourites such as Lucas Cave, Chiffley Cave, and the Temple of Baal, offer wildly popular guided tours of their otherworldly cavernous formations. The Nettle Caves, though, are unique in that they are open for self guided visitors, and while pre-recorded audio tours are available, it's the perfect spot in Jenolan to really lose yourself in what feels like a walk through another planet. 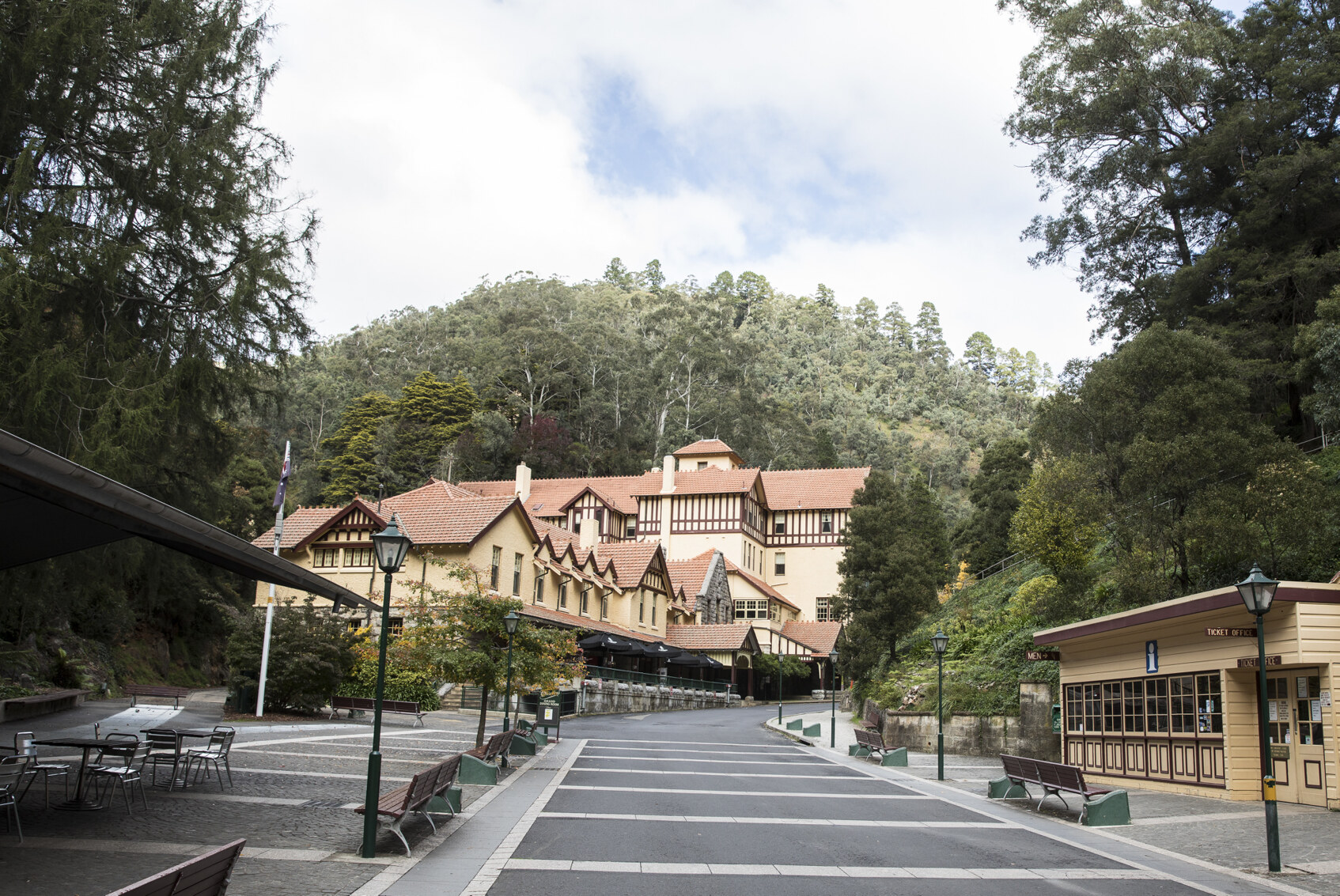 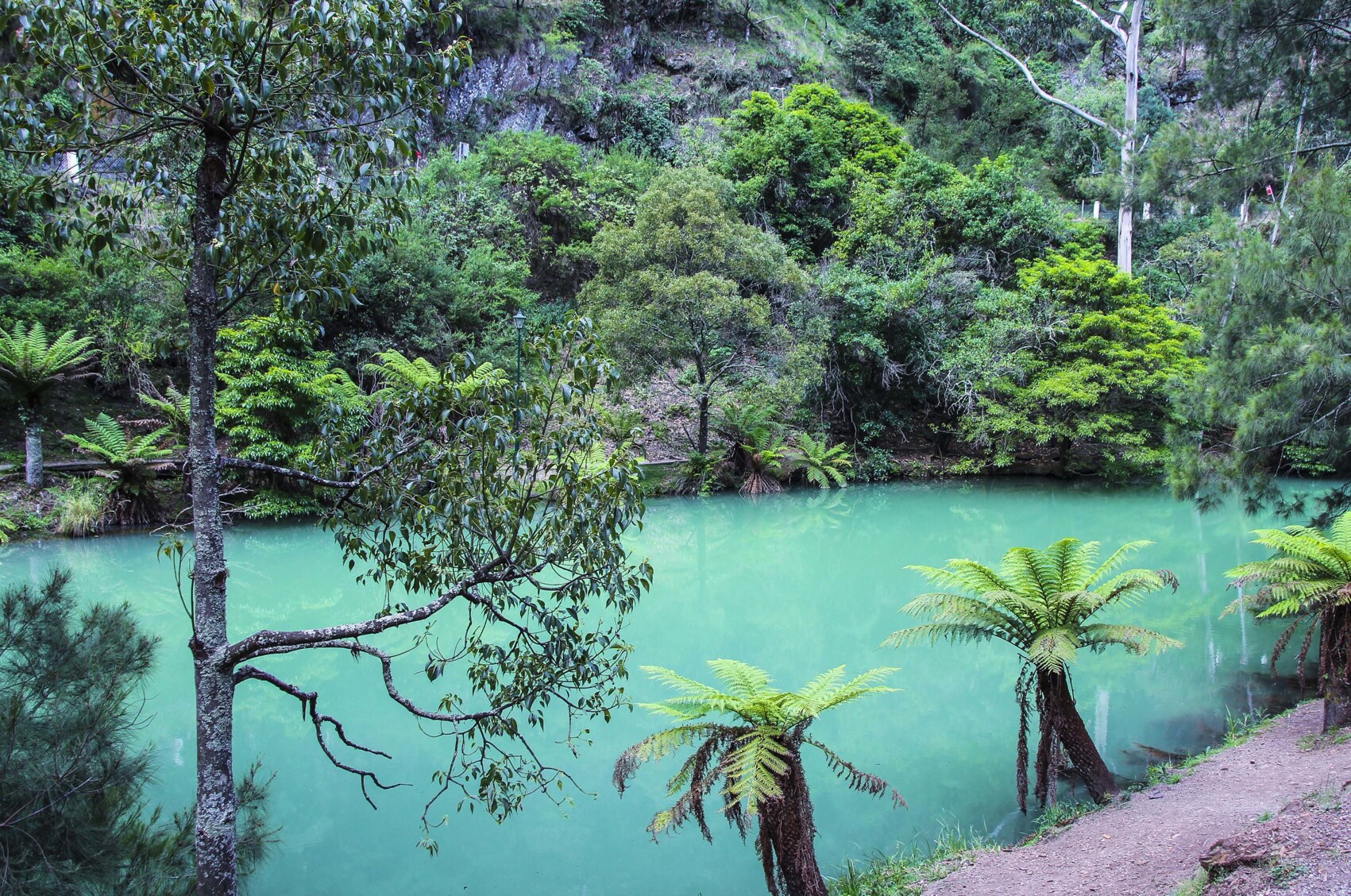 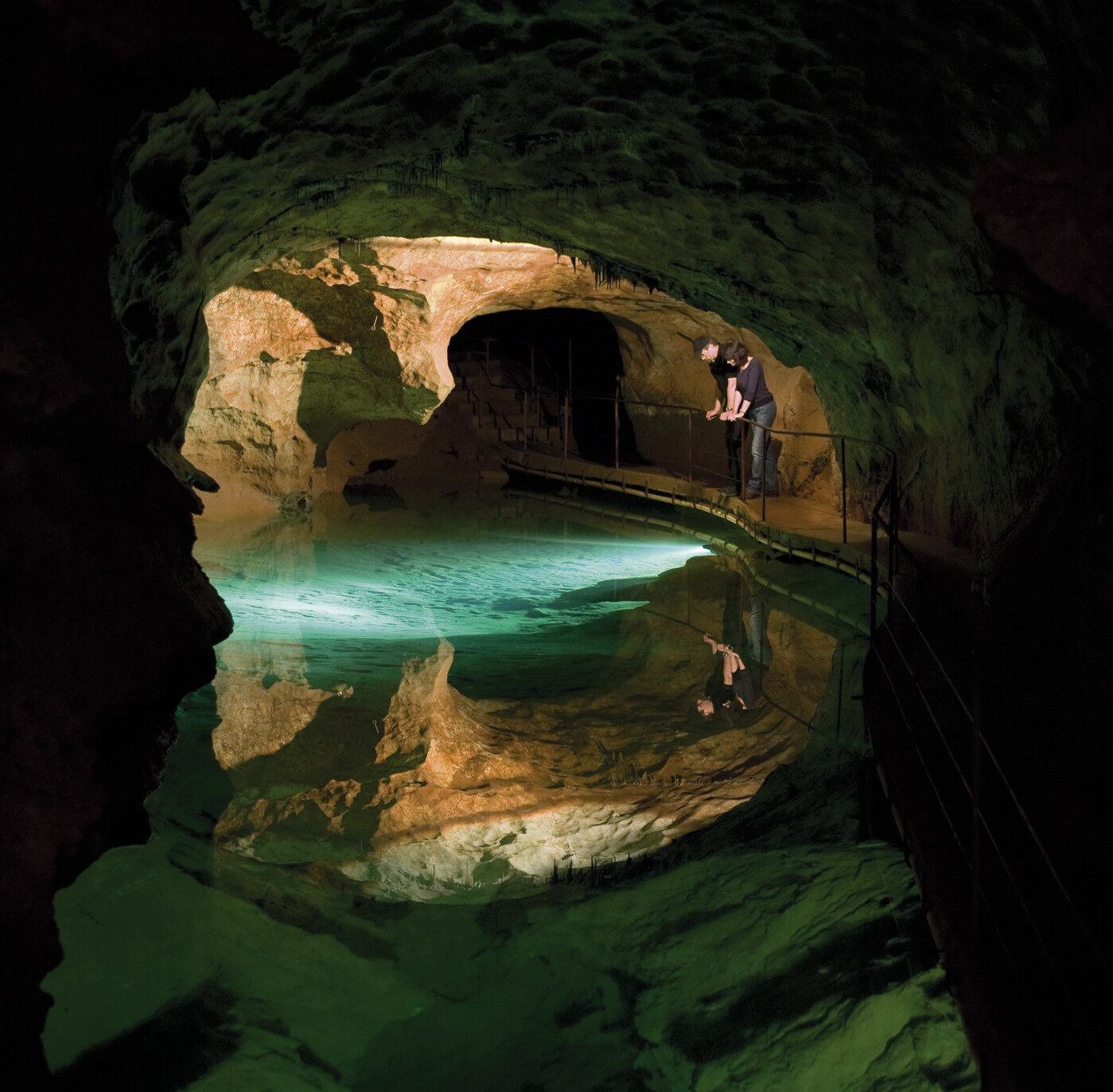 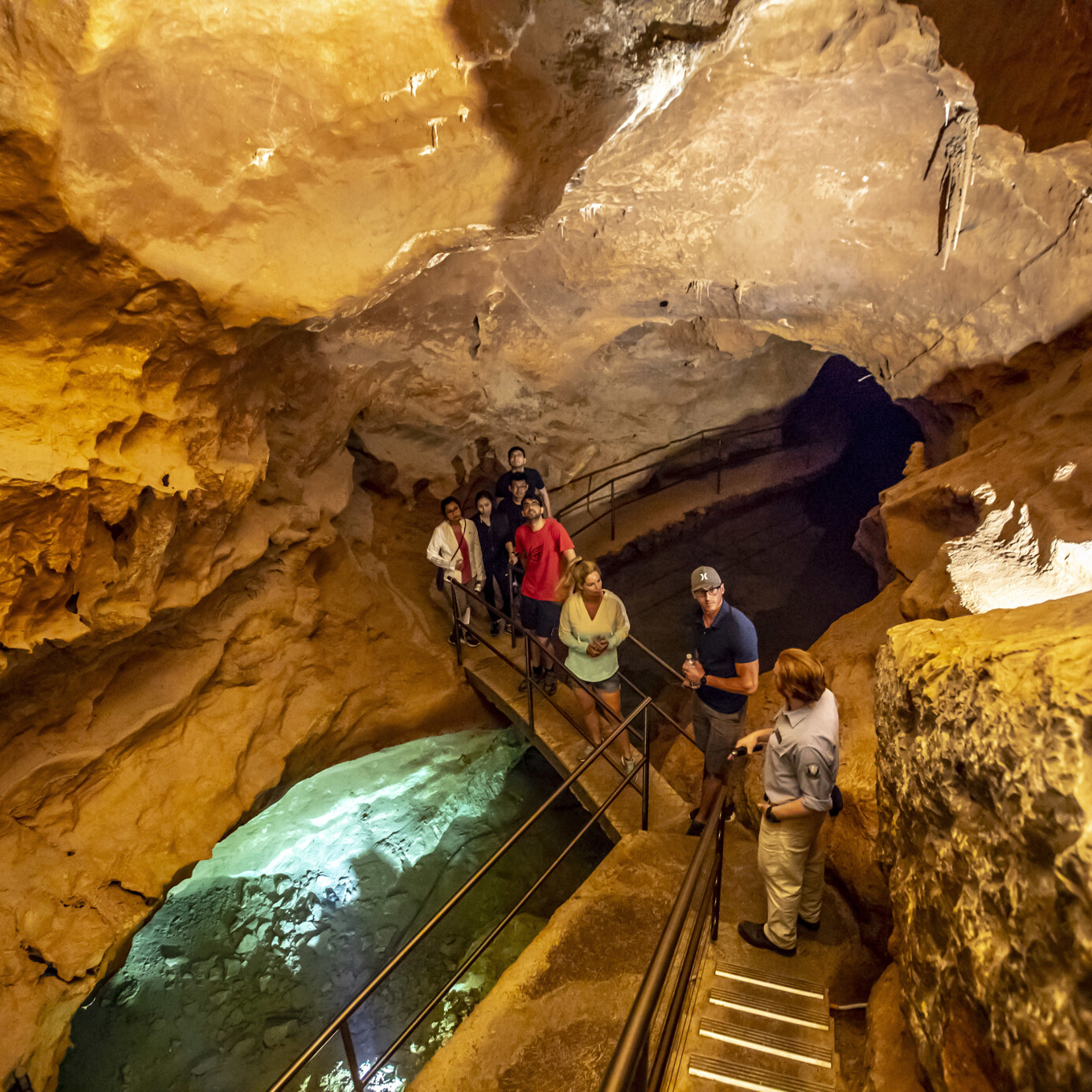 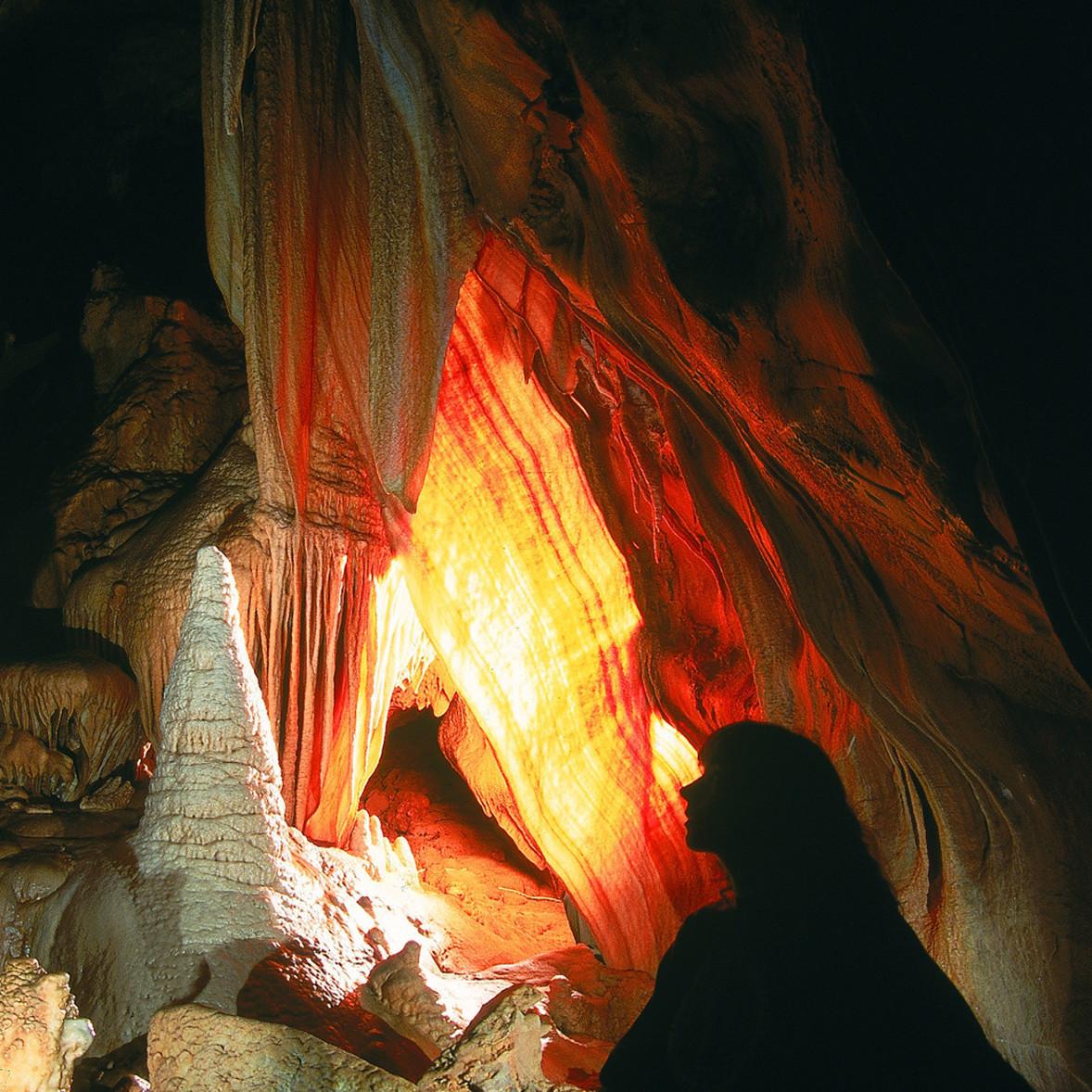 There's plenty to see above the ground in Jenolan too, as the historic area is home to one of New South Wales' oldest operating country hotels; The Jenolan Caves House. This 4 story getaway hotel was built in the mid 1890s from ancient Silurian limestone quarried in the area. It's unique and eye catching design, one that calls to mind rustic mountain lodges of the European alps, was created by New South Wales' chief Government Architect of the time, Colonel Walter Liberty Vernon, and was commisioned as part of an effort by the state government to make the natural wonders of Jenolan accesible to the public. To this day, it is one of the Blue Mountain's most memorable and beautiful places to stay. If you're down for the weekend here, make sure to take a stroll from the hotel under the awe inspiring Grand Arch and down to Blue Lake, where you may catch a glimpse of platypus' bathing in the crystal coloured waters.

Along the Great Western Highway lies one of Australia's most charming and picturesque clusters of towns. The highway rises through the foothills of the Blue Mountains, just beyond the banks of the Nepean River, snaking and winding acrest the gradually climbing ridge lines before reaching a wide and gentle plateau. Here, at the very top of the range, there are four main townships; Katoomba, Leura, Blackheath, and Wentworth Falls. Each has its own unique charm and atmosphere. Throughout this fast growing area you'll find beautiful and tranquil neighbourhoods galore, many spread right up against the cliffs edge and awash with cool mountain air. The town centres are truly enchanting; idyllic main streets dotted with locally owned and community oriented cafes, shops, and restaurants, all bathed in shade by the vibrant vegetation. Its no surprise that so many from Sydney and around the country are dropping their anchors and making a home here in the high country. While its perfect for a weekend away, we can't promise a few days in the Blue Mountains won't have you imagining a lifetime here. 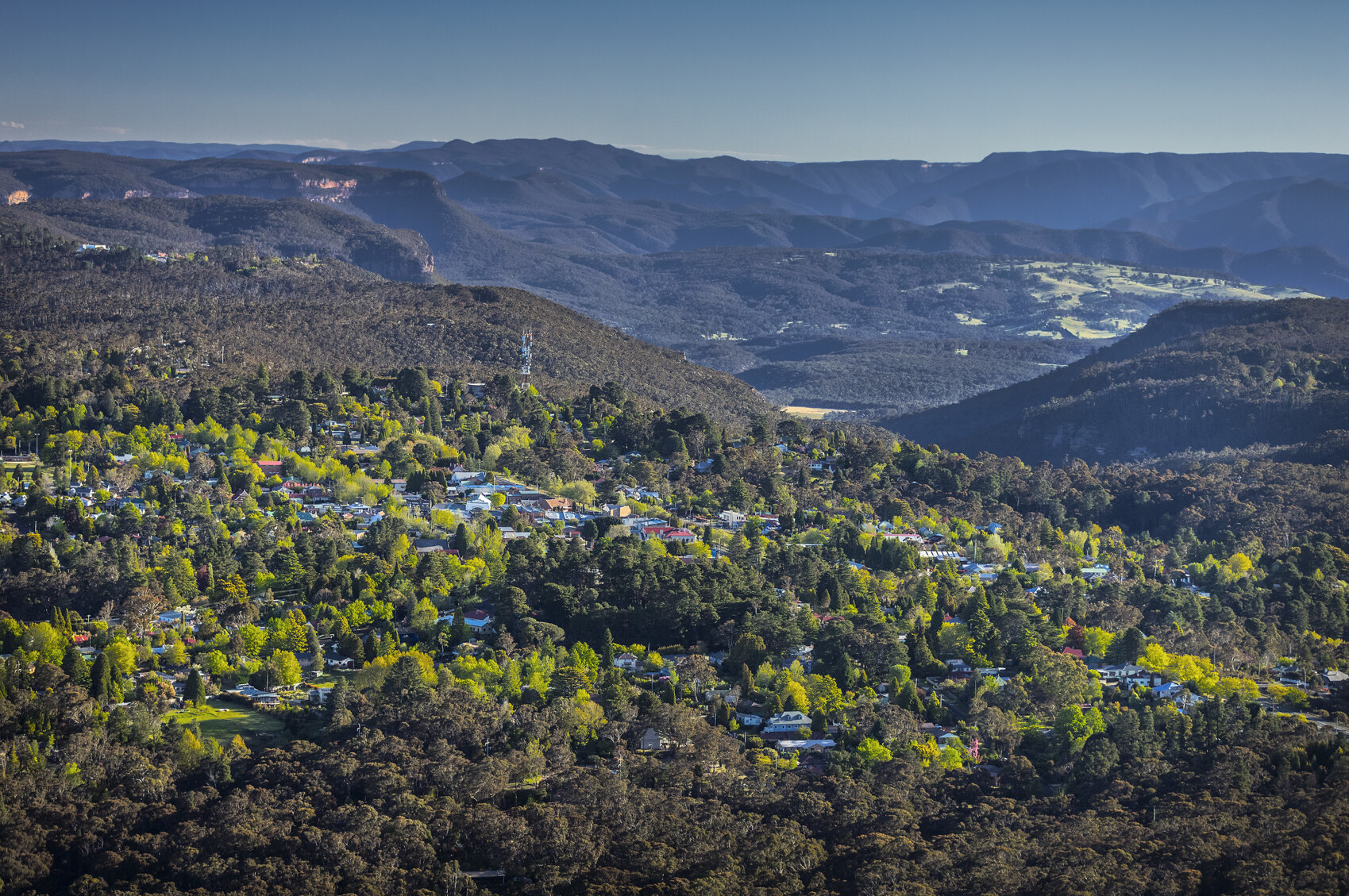 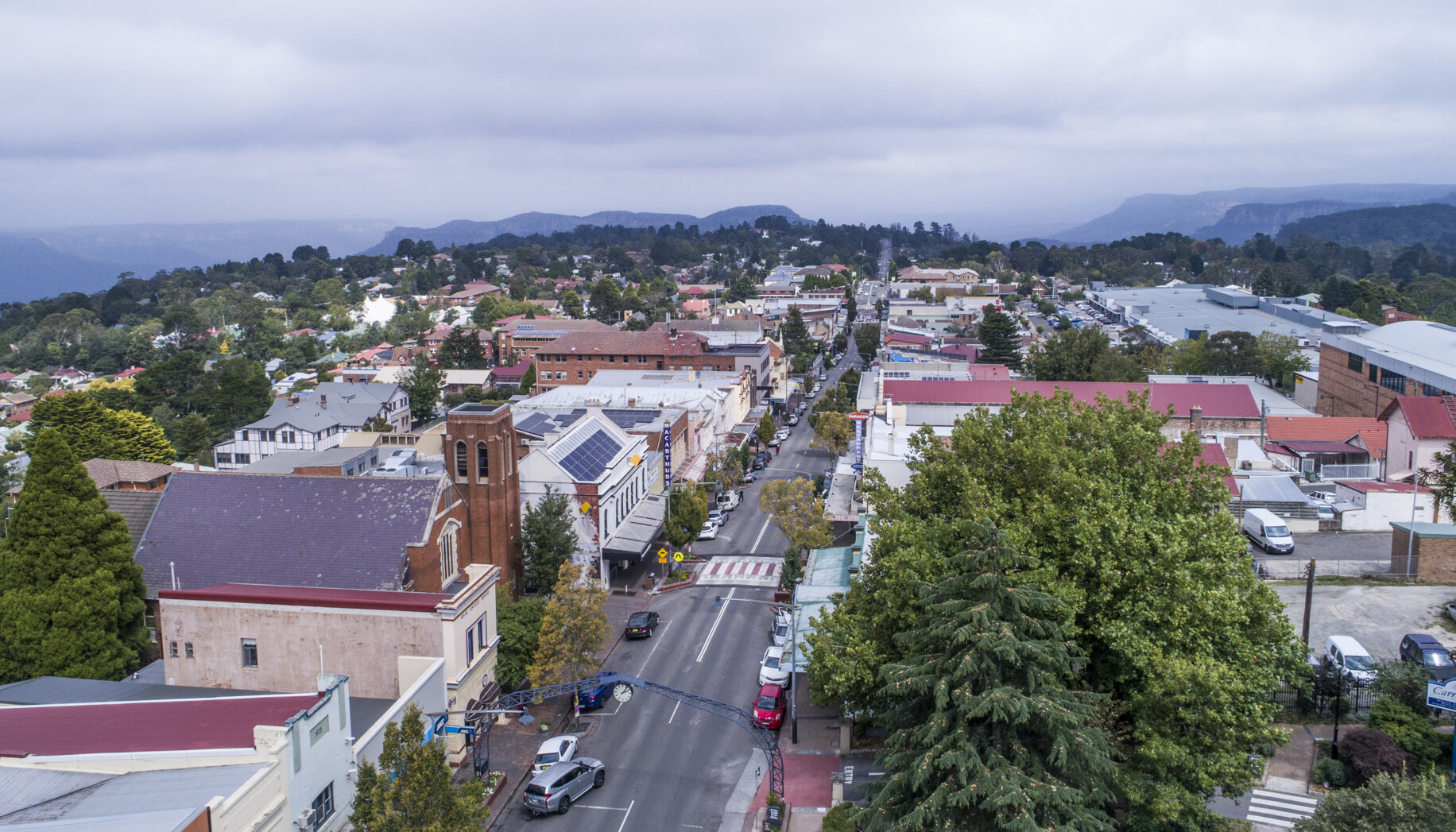 The cafe culture in the Blue Mountains is particularly impressive, so we've rounded up some of our favourite local spots to immerse yourself in, starting with Anonymous Cafe; a delightfully chic modern breakfast spot on the Great Western Highway in Blackheath. The team here specialise in high quality coffee as well as locally grown seasonal produce, and the menu often changes often to reflect the best available ingredients. Everything at Anonymous is made in-house, from pickles and relishes to fresh baked bread, and you'd be missing out if you left without ordering one of the lovingly brewed and delicious varieties of espresso that they pride themselves on.

If you're looking for some of the highest quality European bakery fair in NSW, stop in at the Bakery Patisserie Scharwz. This rustic German style patisserie has been operating just across the road from the train station in Wentworth Falls for 24 years, and is a beloved staple in the local community, with a repuation that brings visitors from all around. As well as wedding and specialty cakes made to order, they serve a wide variety of hand-baked pies, pastries, and continental cakes, all sourced from traditional recipes. 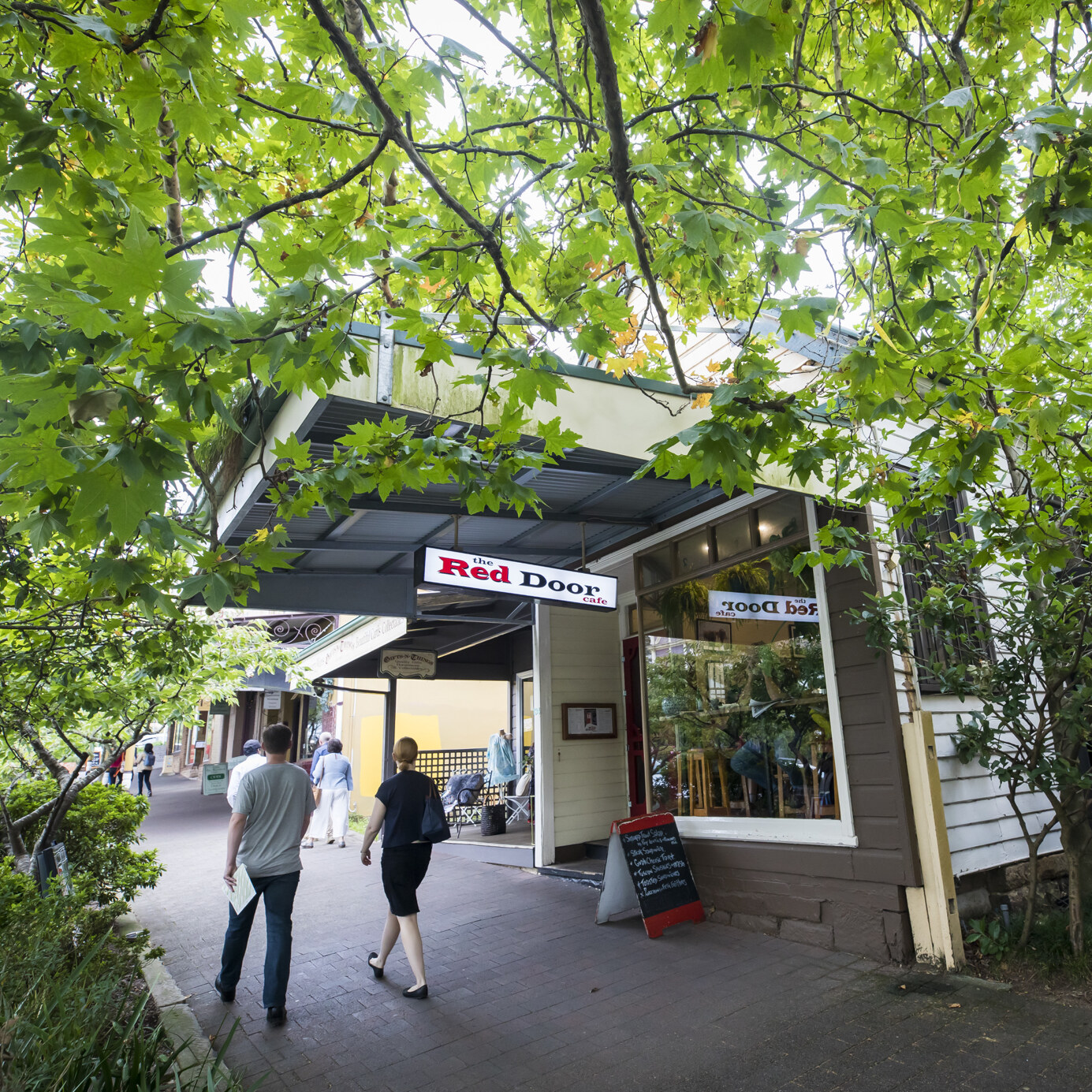 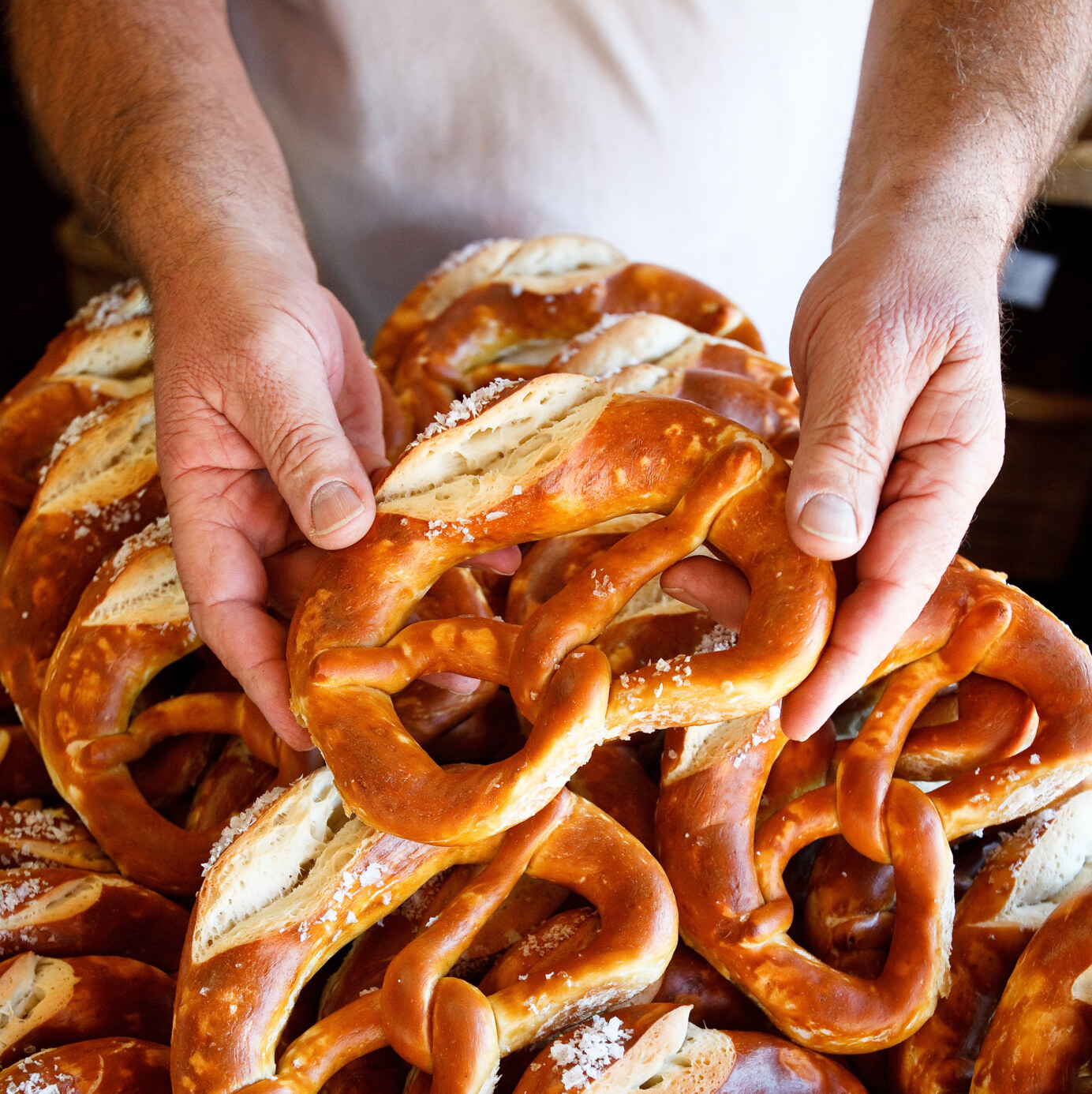 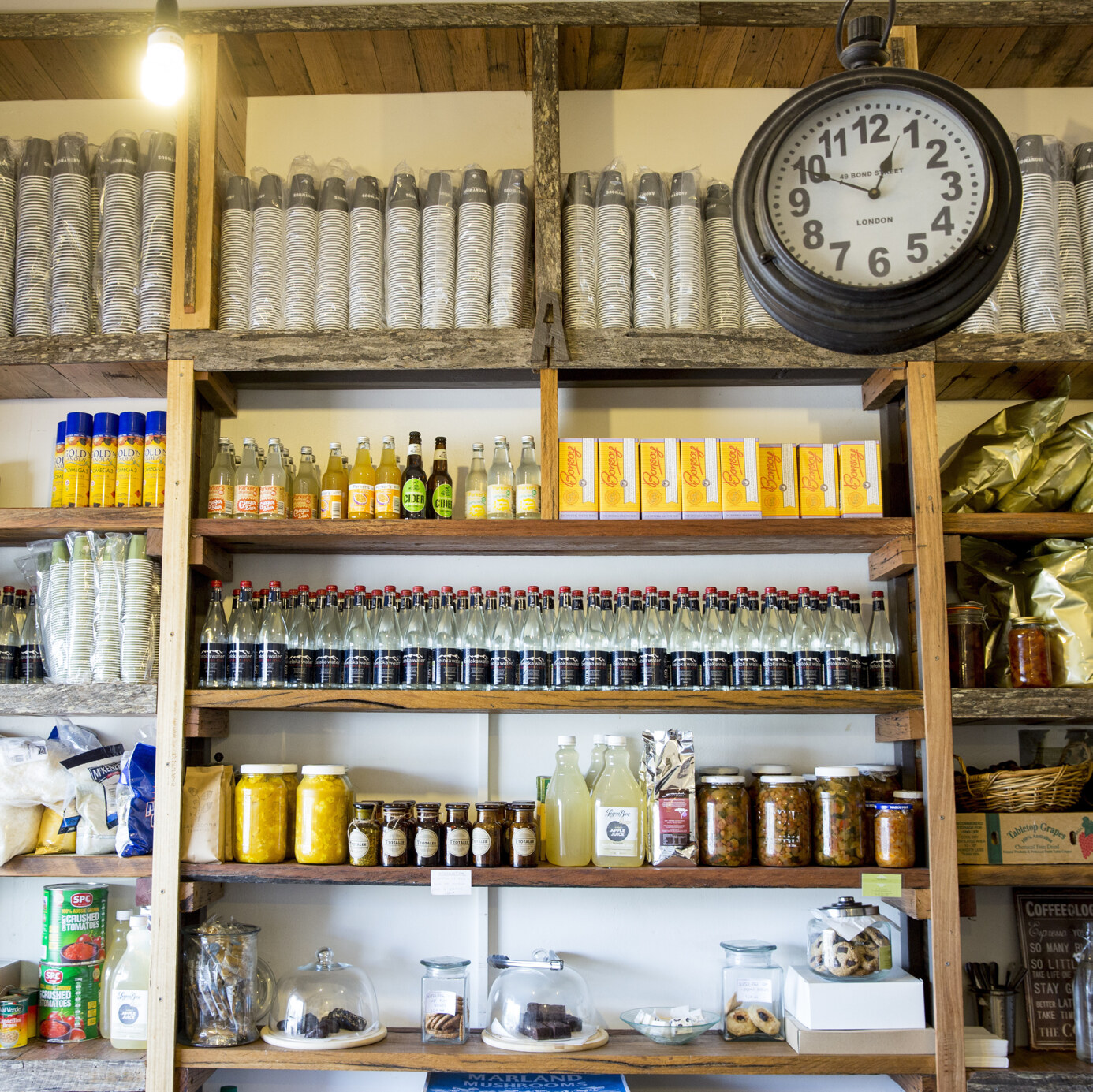 Last but not least is The Red Door Cafe in Leura. This local's favourite is wrapped up in a perfect setting; a tranquil and shady corner of the popular shopping thoroughfare, the Leura Mall, and the outdoor seating options really take advantage of this. On their menu you'll find a sparkling variety of homestyle meals and breakfast classics, as well as a plethora of handmade chutneys, preserves, and sauces that are great to take home as well. With friendly service and a wonderfully relaxed atmosphere, this is one cafe you'll find yourself coming back to again and again.

If you're interested in visiting or relocating to the Blue Mountains, New South Wales, have a read of the official Visit Blue Mountains website, or alternatively check out some local listed properties right here on GoRegional. 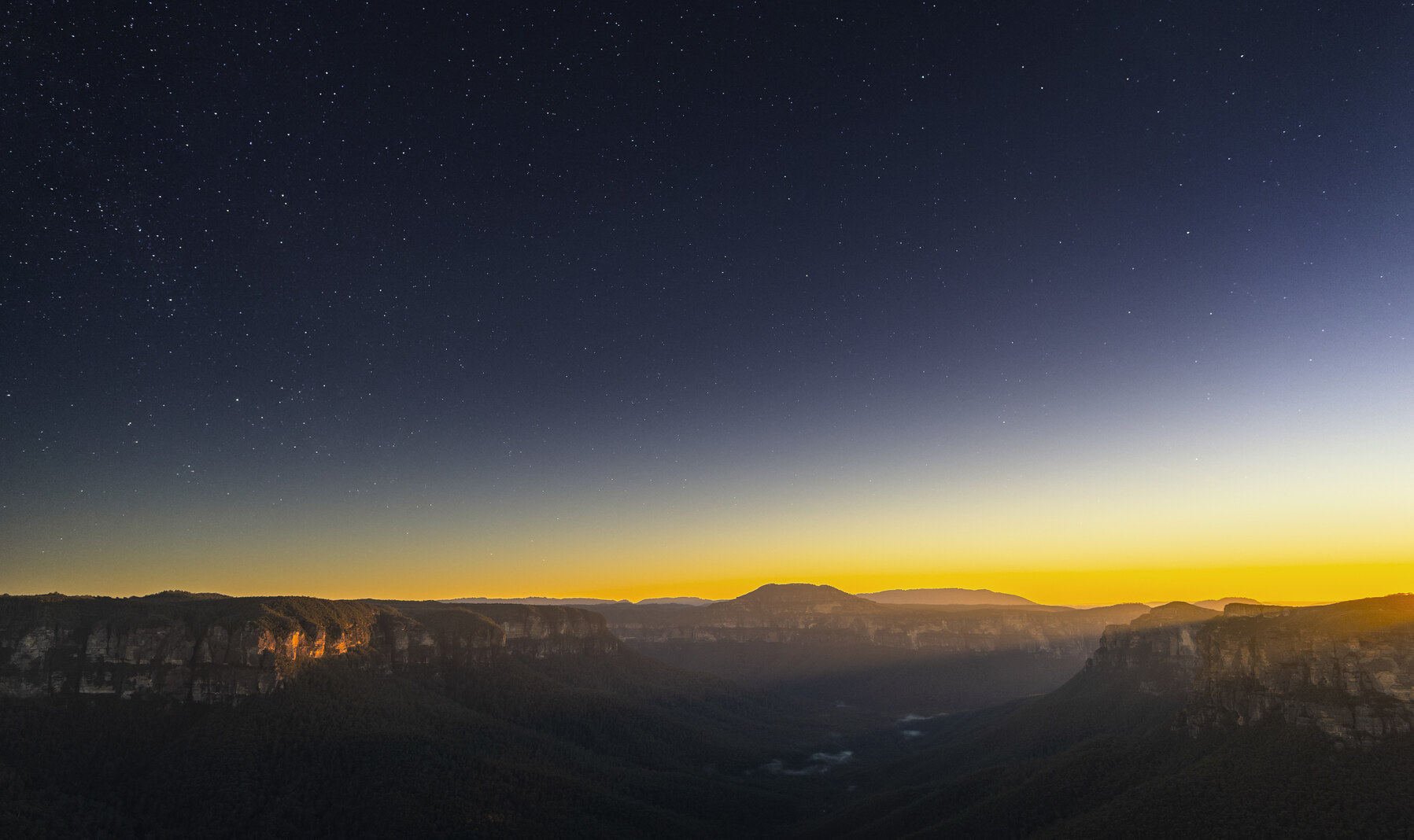