A Journey Down the Murray

The river that shaped a nation

The Murray is Australia’s greatest river. It descends from the cool mountain streams of the Snowy Mountains, coursing and curving through the vast fertile riverlands and the sparse red deserts of New South Wales, Victoria, and South Australia for kilometre after kilometre before it finally makes a dive towards its delta, where the sum of the gargantuan Murray-Darling drainage basin flows out into the Southern Ocean. Along it’s boundless extent, there are acres of rolling hills and pastures, rugged ridges and valleys dancing near the snowline, limitless plains of bush and sun burnt red, and all kinds of charming and memorable towns, villages, and hamlets. There’s so much to see and explore on the river and just beyond its banks. In so many ways, the Murray has shaped our nation and its history and continues to define the diverse lands that it inhabits, and it couldn’t be more important to learn about and preserve this remarkable body of water. That’s why here at GoRegional we’ve decided to take you on a brief tour of the wonderful worlds’ adjacent the Murray River. 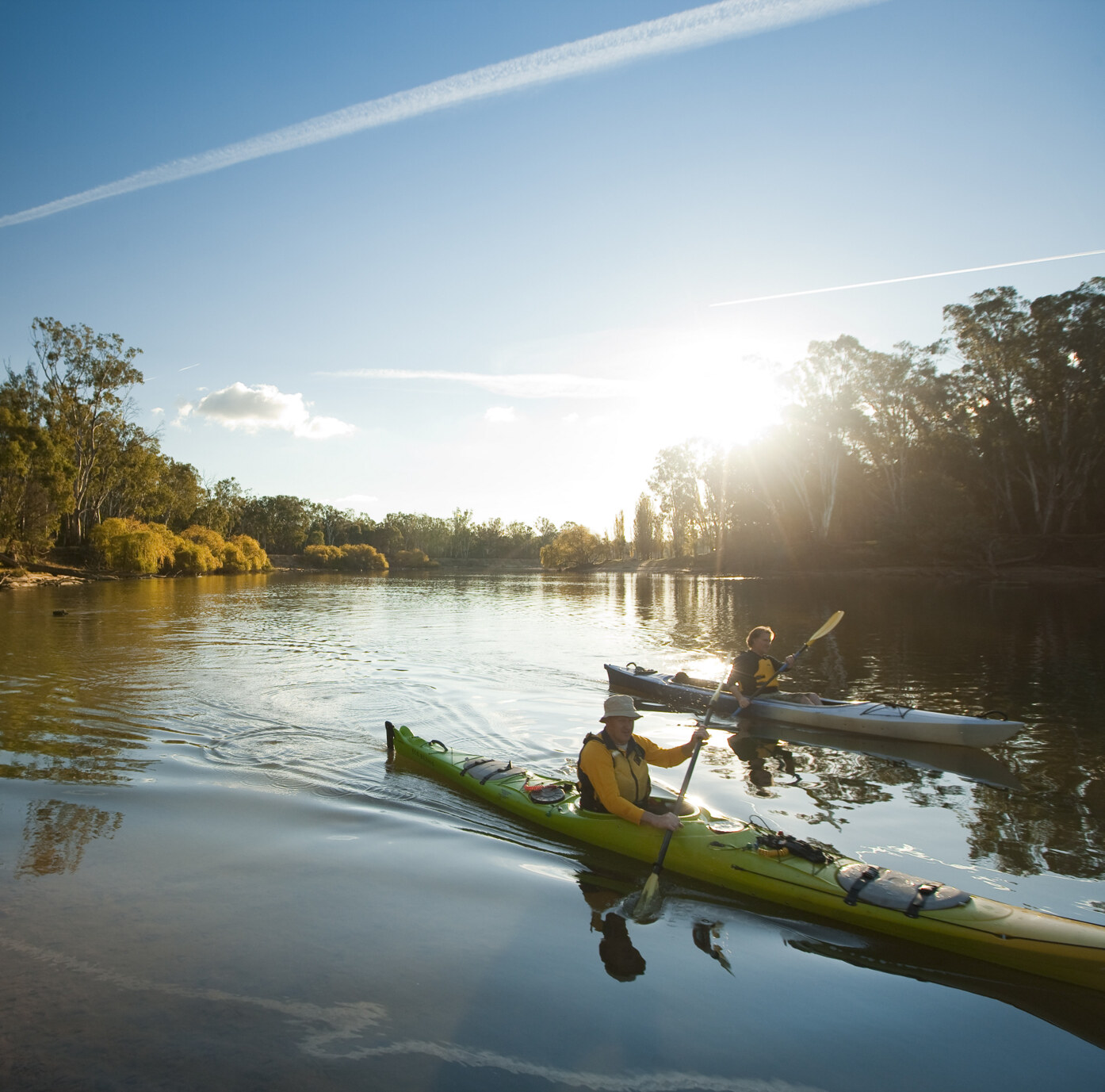 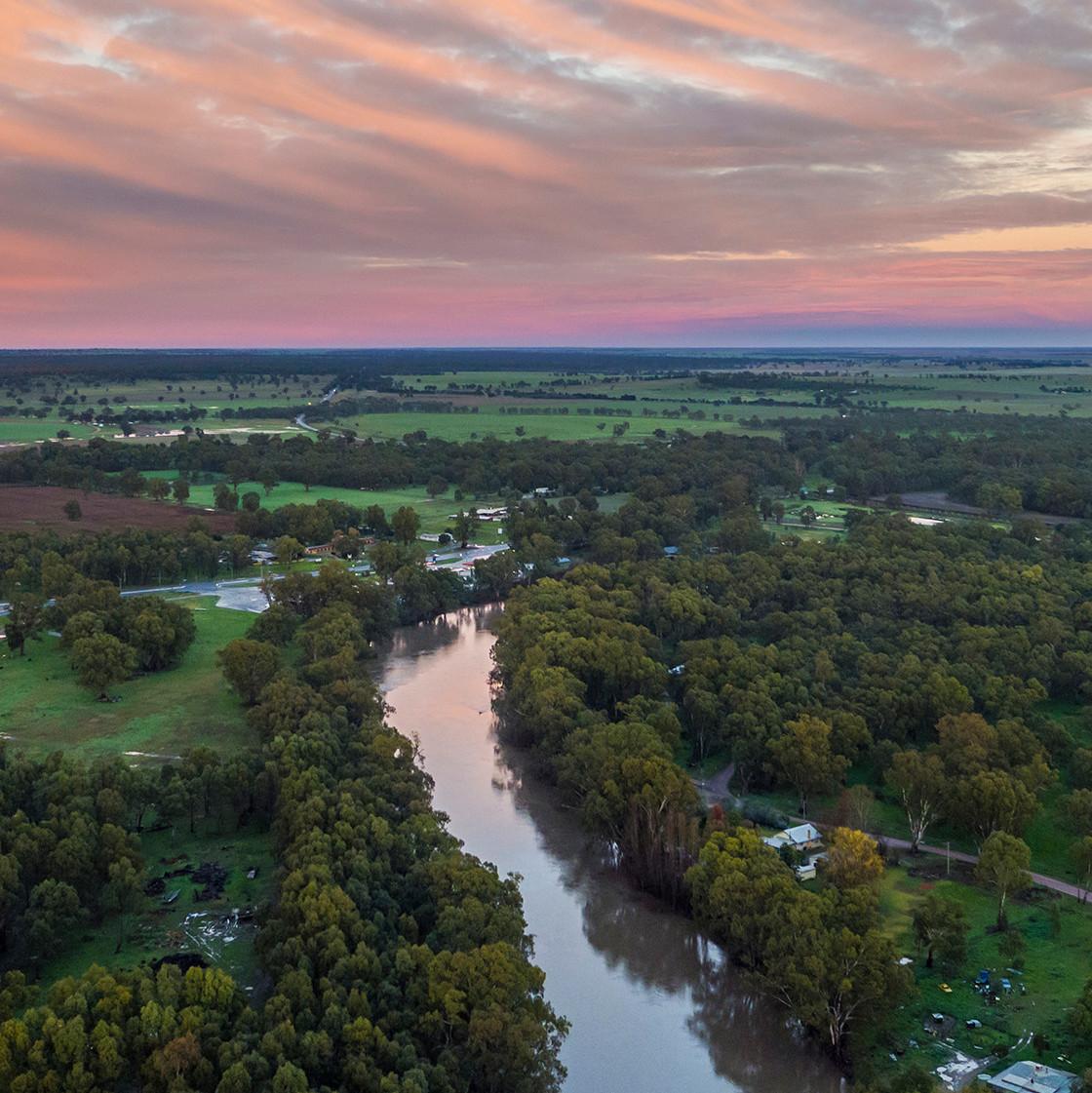 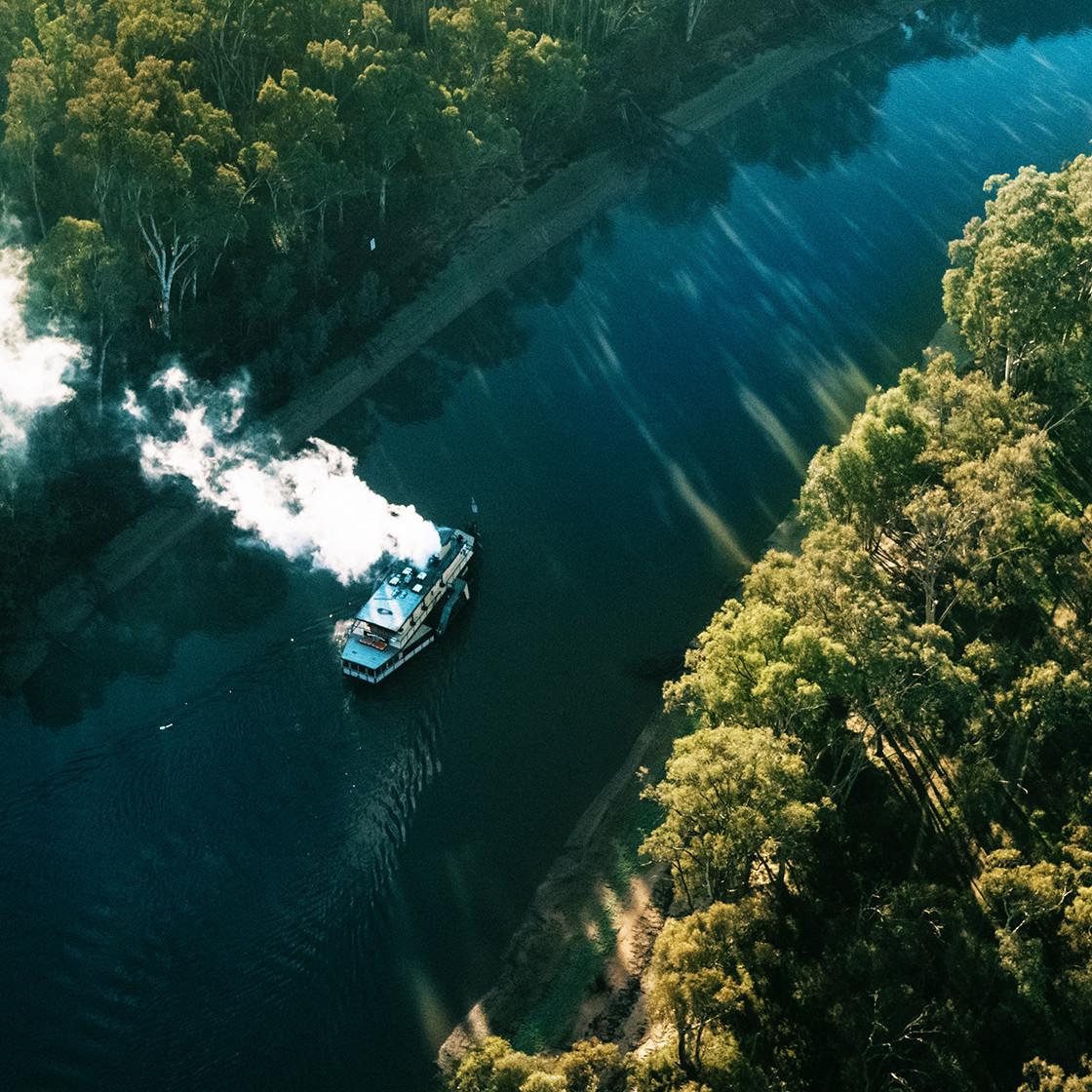 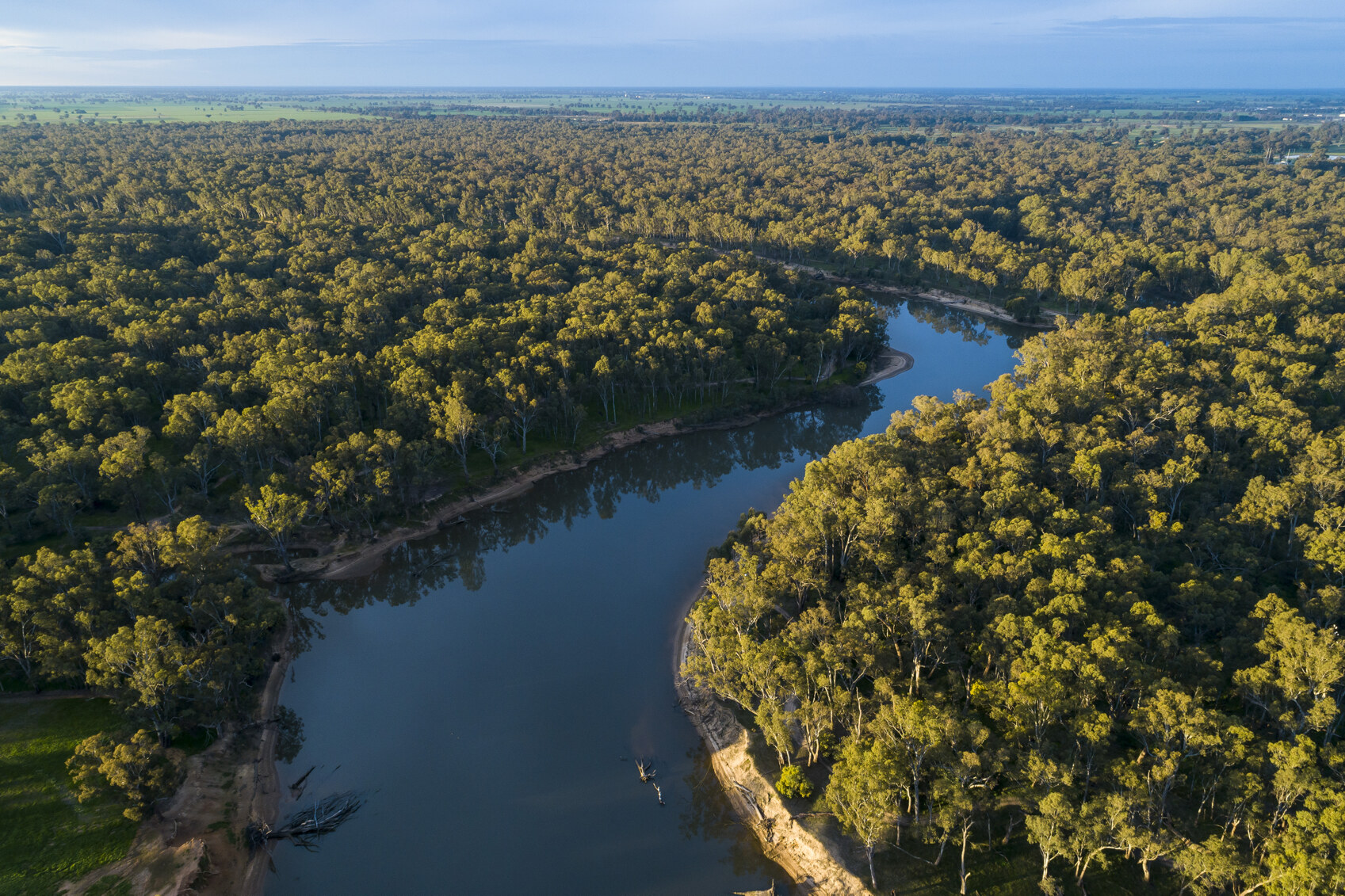 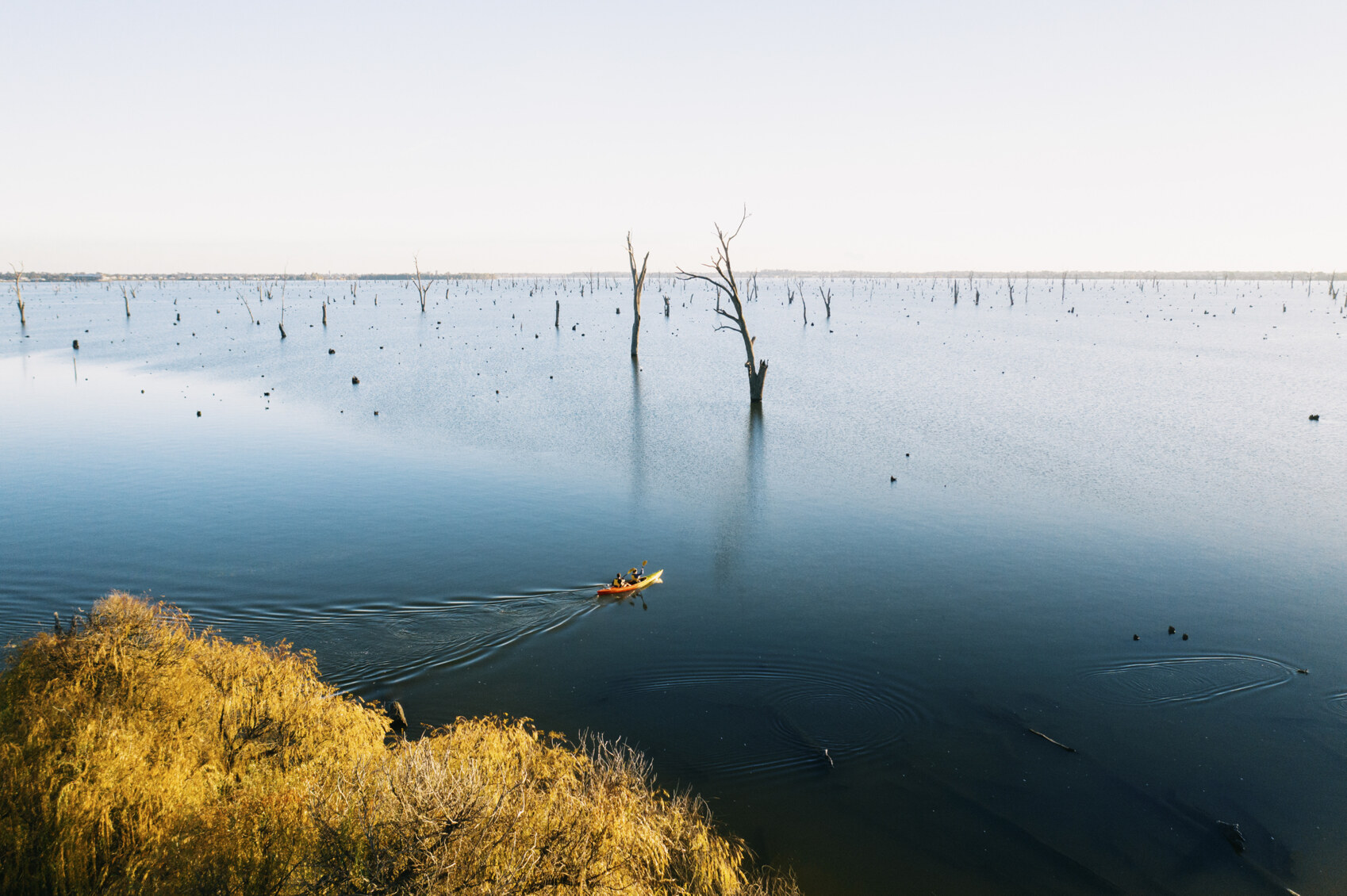 From Mildura to the mountains, the Murray River defines the border between our two most populous states; New South Wales and Victoria. From East to West, this section of the river is it’s largest and most diverse, crossing mountains, fields, and desert. The majority of this part of the Murray, though, is set against a vast and picturesque region of agricultural lands known as the Riverina; the green plains nourished by the Murray and two of its main tributaries, the Lachlan and the Murrumbidgee.

There are a plethora of endearing and picturesque towns that lie astride the Murray in the green and plentiful riverina, and many are twin cities, boasting a town on each side of the banks and thus, a town in each state. One of our favourites, and an often underappreciated spot, is Yarrawonga-Mulwala. This delightful holiday town had built up around Lake Mulwala; a short stretch of the Murray where it forms a man made reservoir, caused by the Yarrawonga Weir. Sometimes called 'The River of Islands' for the marsh archipelagos that lie in its Eastern waters, Lake Mulwala is home to some of the best swimming, boating, and fishing in the Murray riverina. There are scores of the iconic Murray Cod paddling beneath the surface here, and keen fishermen and women travel from across the country to bring home a catch from this unique lake. Its tranquility and beauty is renowned, and perhaps best made use of at The Sebel Yarrawonga; a 4.5 star boutique hotel located on the lake's Southern banks, just adjacent the Silverwoods Yarrawonga 18-hole golf course. This is a world class relaxation retreat, with endless facilities including tennis courts, a spa, and a lakeside infinity pool with an attached bar, and all of it designed with a modern edge and grand sense of style. There are few better ways to unwind on the Murray than at the Sebel Yarrawonga. 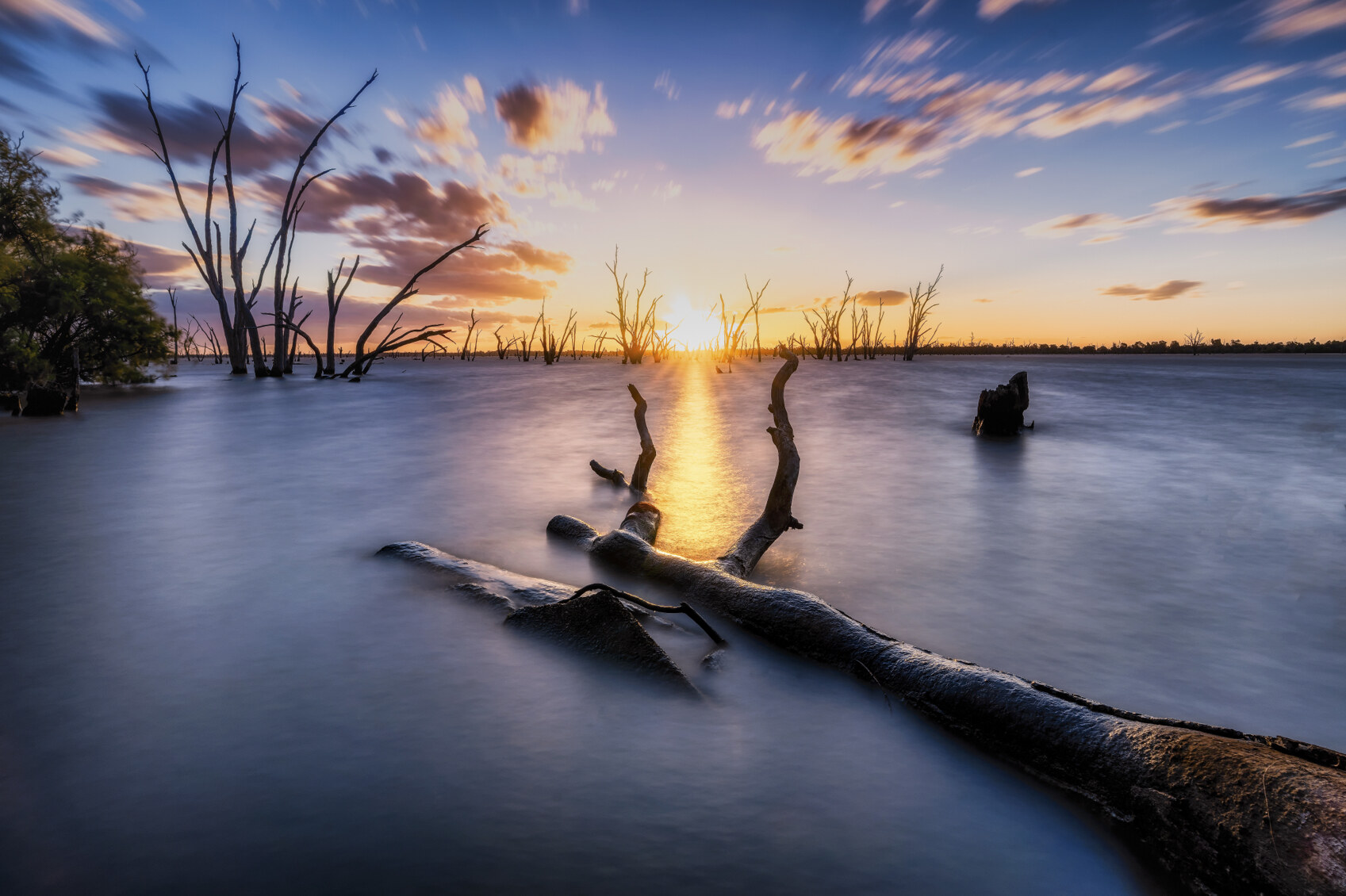 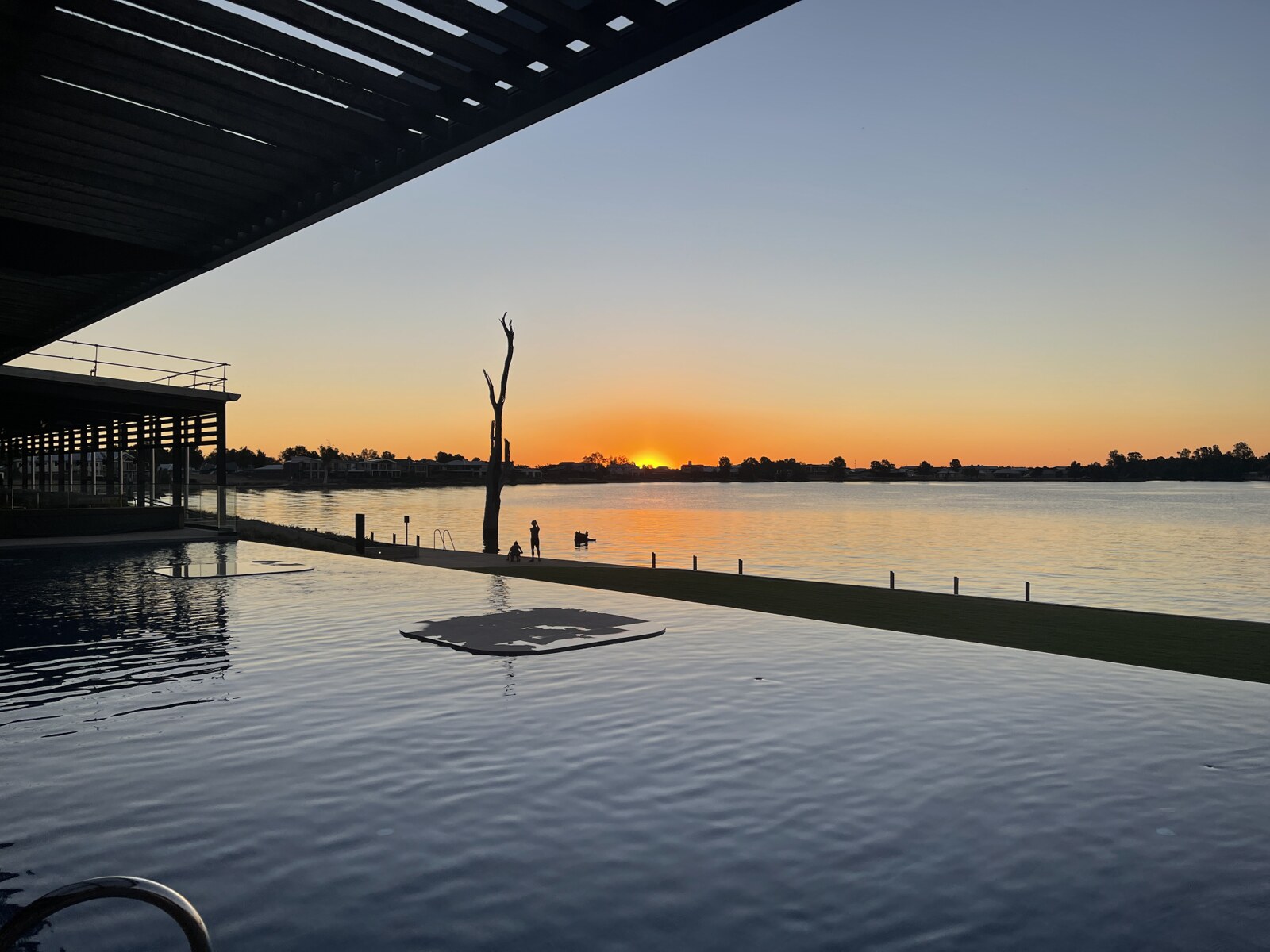 Another real gem of the Murray riverina is the twin towns of Echuca-Moama to the West, near Shepparton. There's no lake here, as the Murray winds and curves through this historic settlement at a full roar, carrying with it a particularly eye catching fleet of vessels; the legendary riverboats of Echuca-Moama. As the crow flies, this is the closest Murray settlement to the capital of Melbourne, and as such it gained great prominence starting in the 1860s as a riverport and railway junction, where paddle steamers one after the other arrived with all kinds of goods from wool to wheat to timber. During a time in the 1870s, this was the third largest port in the country after Sydney and Mlebourne, and the stunning red gum wharf built to handle this influx survives today as a reminder of the town's storied past. Today, Echuca-Moama maintains the largest fleet of paddle steamers in Australia, and they are regularly open for scenic and historic rides down the Murray. Our favourite operator is Murray River Cruises in Ecucha, who since 1996 have been welcoming passengers aboard their three ship fleet consisting of the PS Emmylou, the PS Canberra, and The Pride of the Murray. Cruises range from daily tours of 1-3 hours, to up to 6 nights stay, and offer a truly transportative experience taking you back to the days where the Murray was our nations busiest highway. 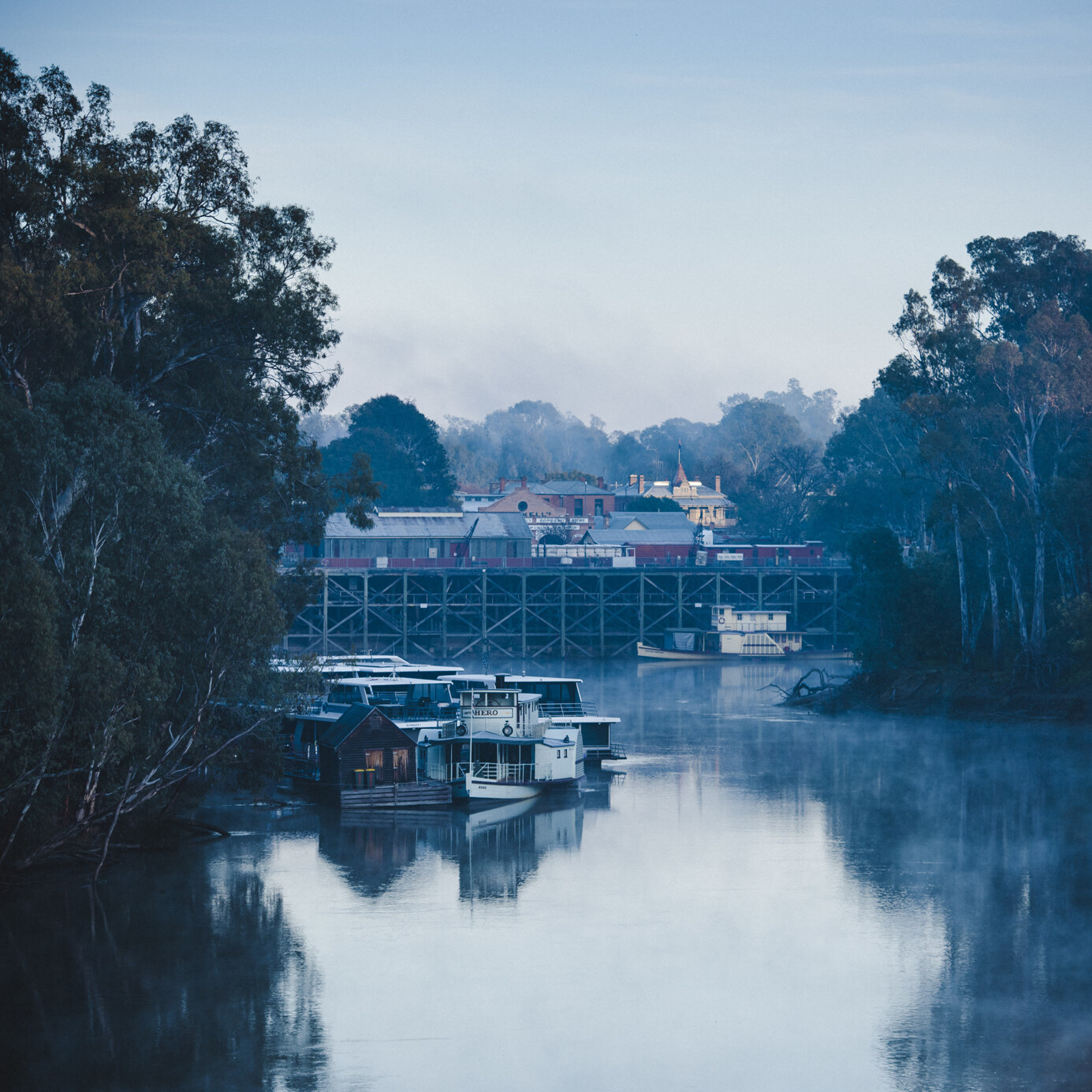 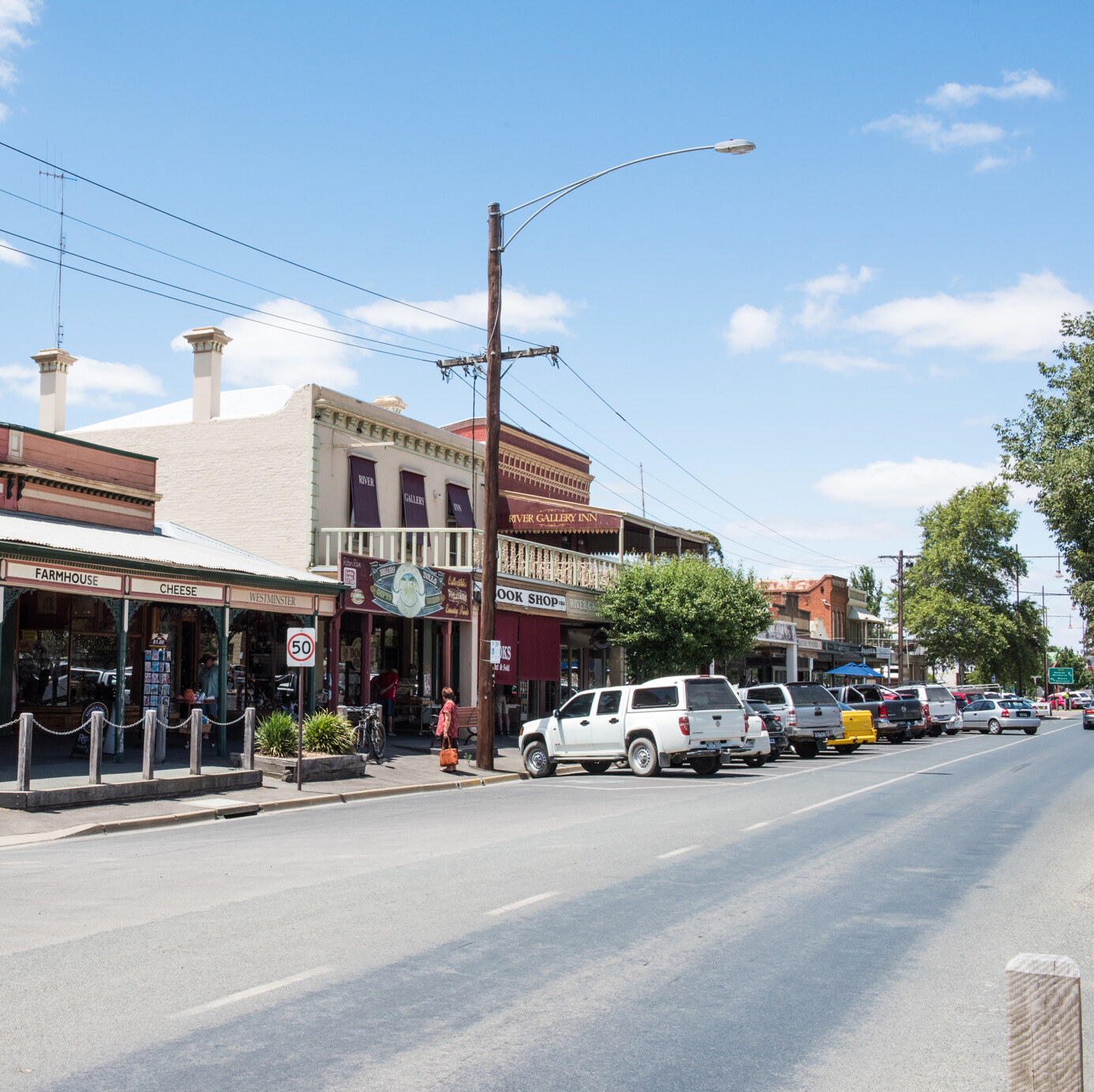 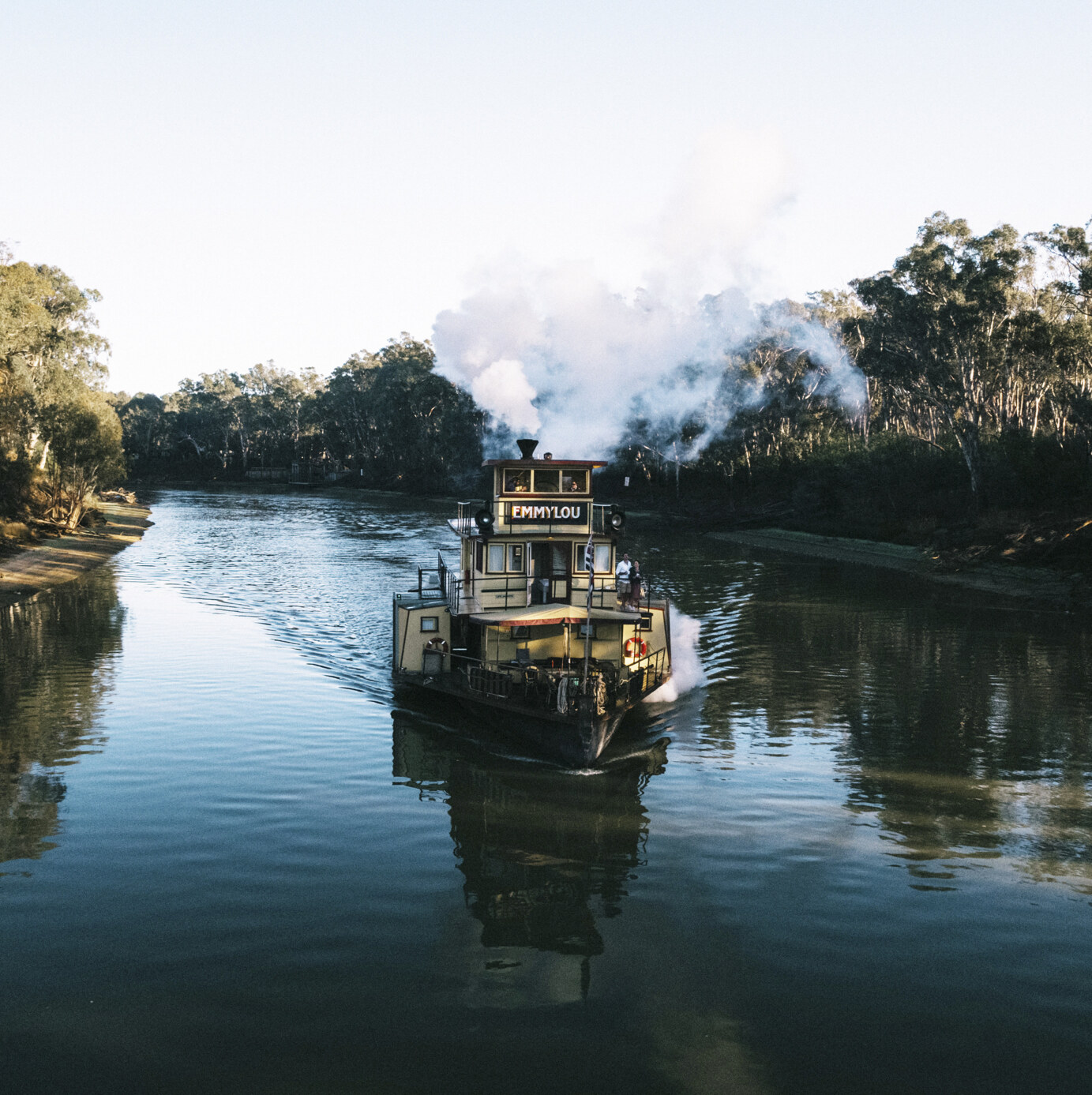 A green world within the outback

In the harsh dry bushlands of our nation's red centre, there is little in the way of water and thus little in the way of life, but there's one corner of this vast wilderness where things are a little different. From Swan Hill in Victoria to Murray Bridge in South Australia, crossing hundreds of kilometres, the Murray River carves a trail through the arid outback, leaving winding streams and fertile soils in its tracks like an snaking oasis. Some of Australia's most distinctive and charming outback towns are situated alongside this stretch, and are shaped and coloured by the almighty influence of the Murray.

Mildura, on the Victorian side of the border, is one of the largest population centres in the vast and barely populated Australian desert; a bustling outback city of nearly 40,000. Just a few kilometres downriver from town is the Murray's mammoth junction with its largest tributary; the Darling River, situated at the smaller town of Wentworth. The Murray and the Darling are Australia's longest and third longest river respectively, and together they form a vast system known as the Murray-Darling basin, spanning almost all of NSW and Victoria, and reaching into South Australia and even parts of Queensland. The sheer size of this system is awe-inspiring, being by far the largest river based drainage area in Australia and among the 20 largest in the world. Ultimately, the presence of life, diversity, and the potential for civilisation here in inland Eastern Australia owes itself entirely to these two rivers and their mighty confluence.

The confluence of the Murray and Darling rivers at Wentworth. Image credit: Destination NSW 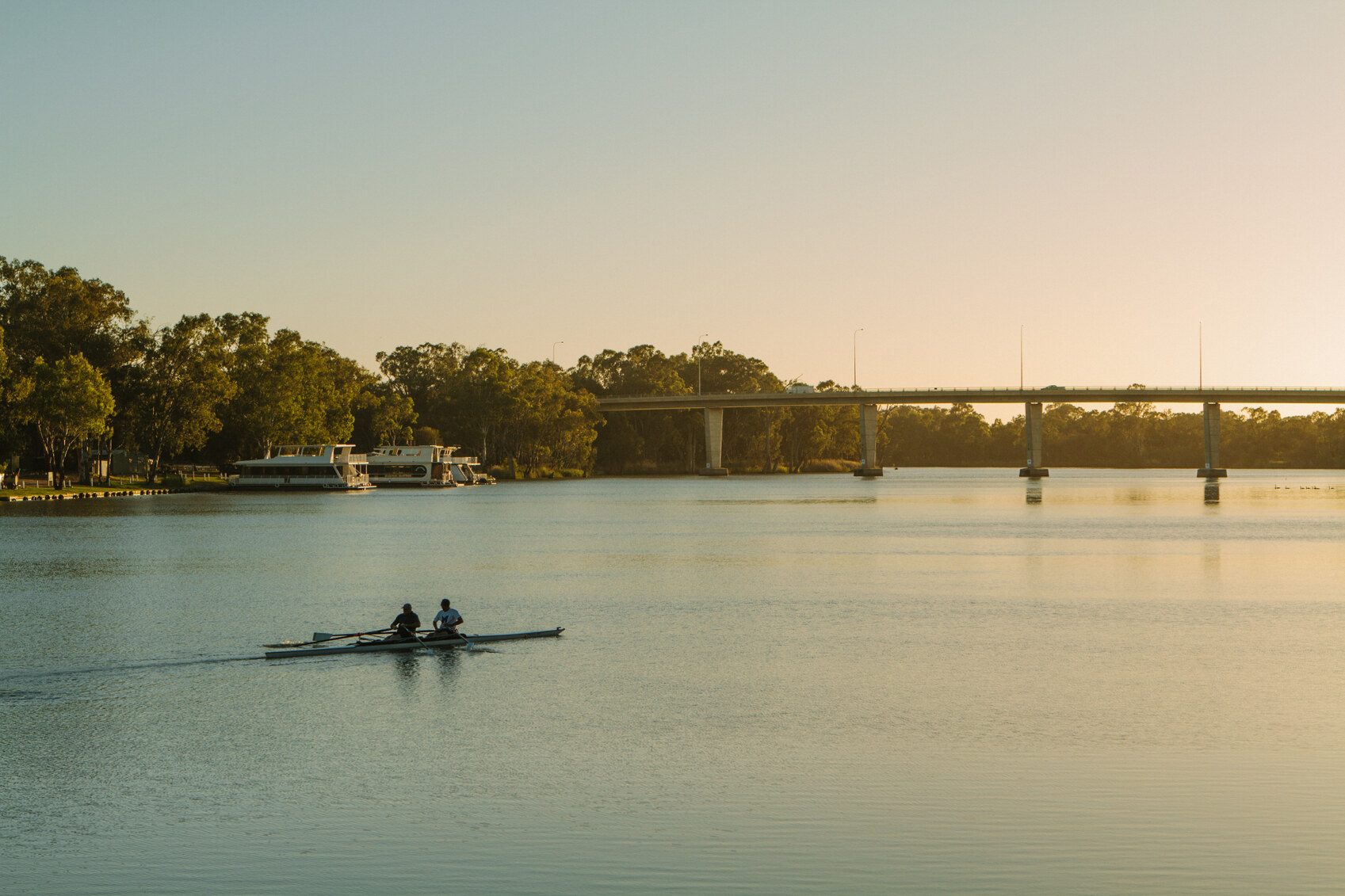 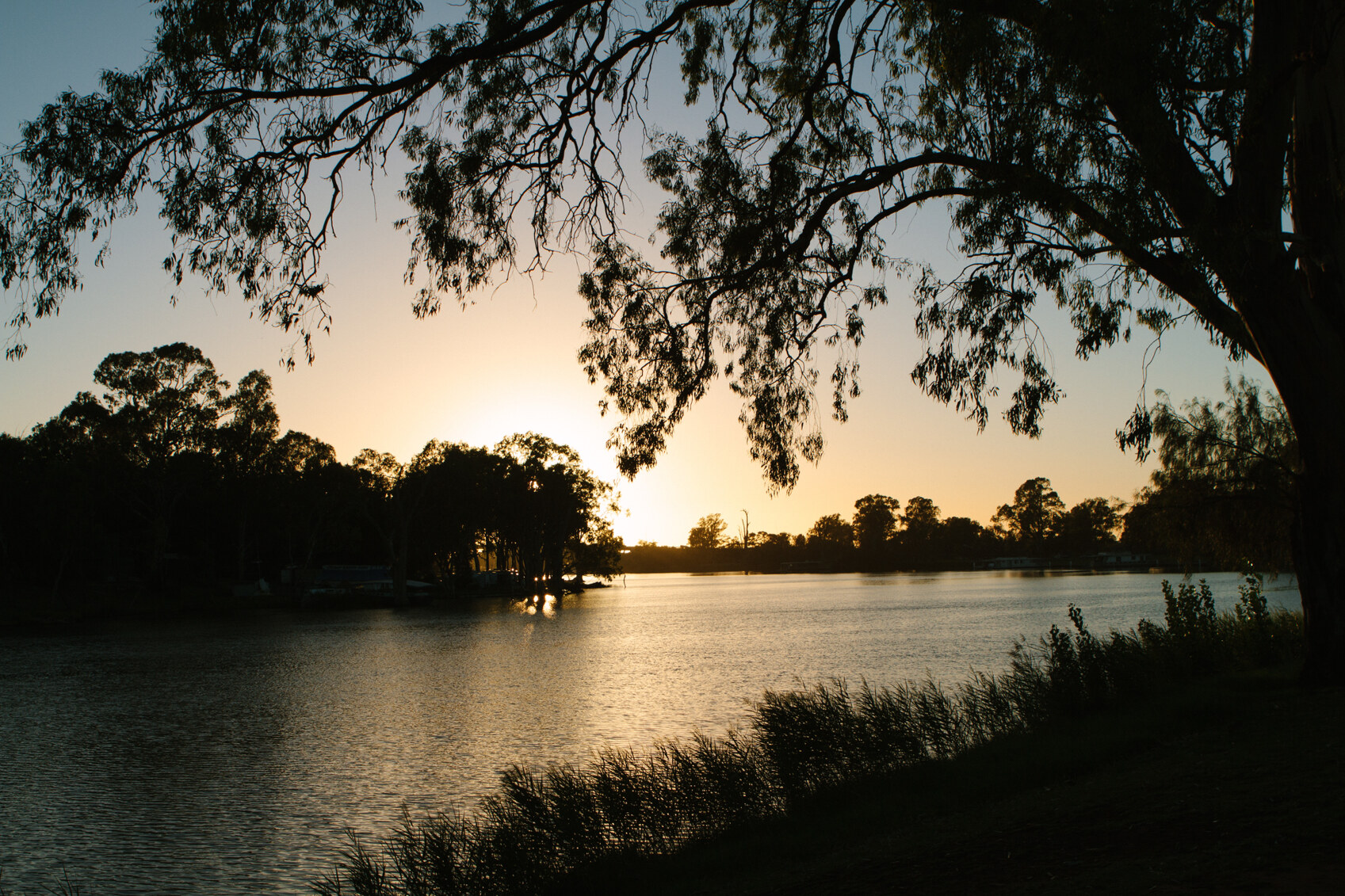 The town of Mildura itself is no pit stop either, as this historic settlement boasts one of the Murray's most beautiful riverfronts, as well as a rich and distinctive outback culture. The locals here truly understand the value of the Murray River, perhaps better than anywhere else, and its no surprised that every inch of the riverside here is lined with modern and inviting parks, ampitheatres, cafes, and even a $120 million man-made marina project that has created a whole new waterfront neighbourhood right near the heart of town. There's the Mildura Riverfront Gallery on Hugh King Drive; a community-oriented gallery displaying local artists working in all kinds of mediums and styles. They're just opposite the train station and open daily from 10-2. Make sure you don't miss the Australian Inland Botanic Gardens; the Southern Hemisphere's first semi-arid botanic gardens, located on of Wentworth in NSW, though not far from Mildura. This sprawling destination showcases and celebrates all kinds of flowers, bushes, and trees from Australia and from overseas, creating stunning designs with their diverse colours. The centrepiece is a rose garden consisting of 1600 colour coordinated and precisely arranged bushes. 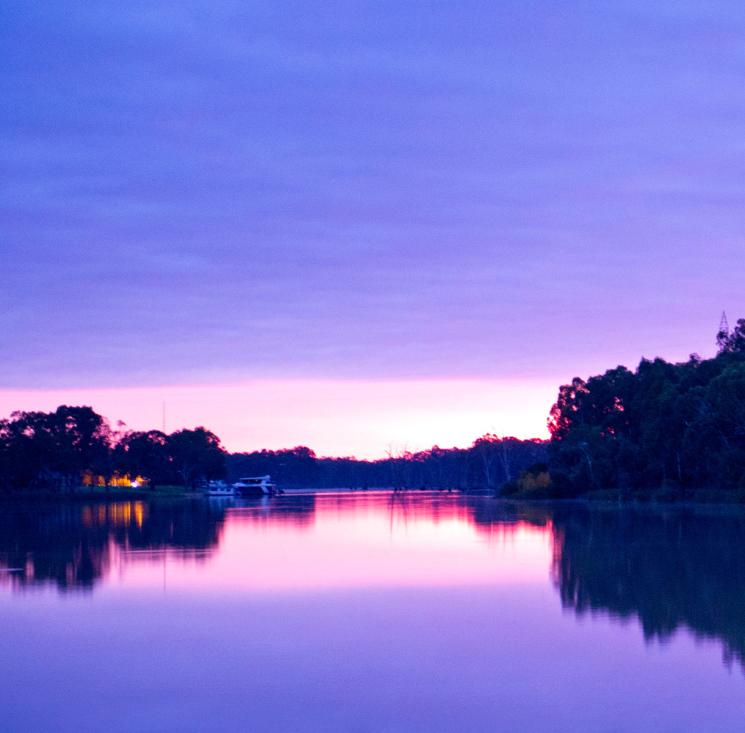 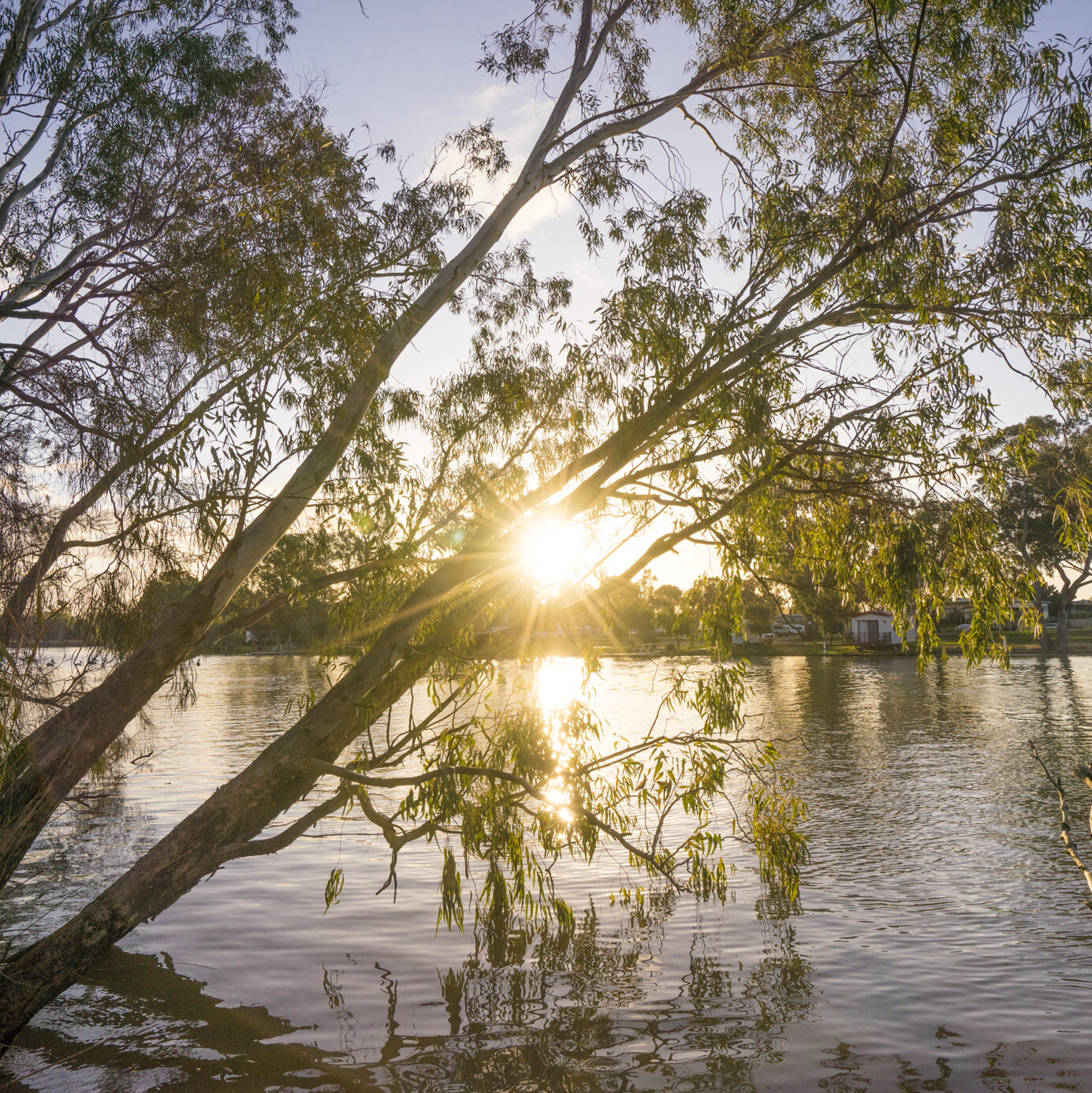 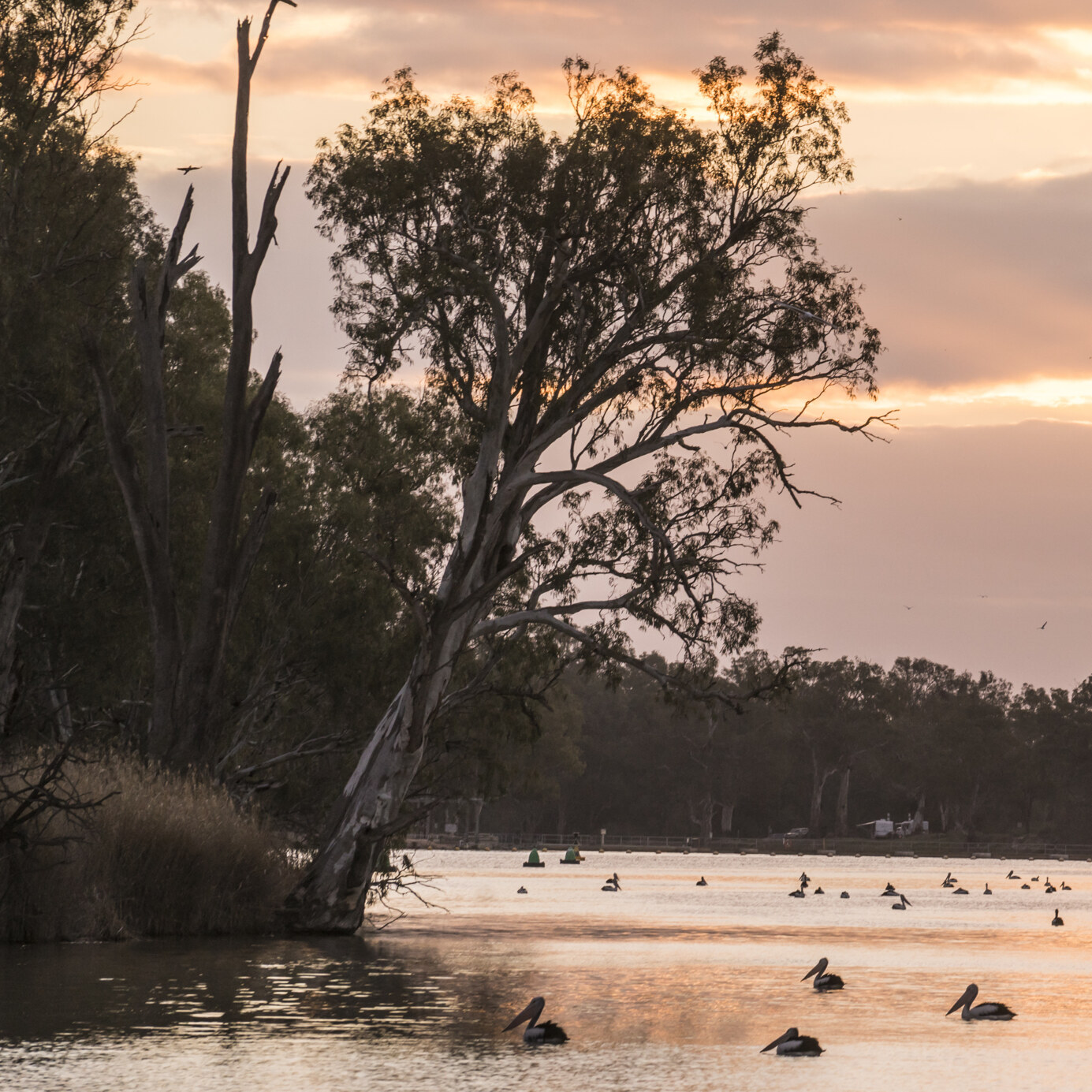 If you're looking for the best hiking adventure on the Murray River, look no further than the Murray River Walk. This is the flagship guided experience offered by Murray River Trails, a smash hit new adventure touring company based in Renmark, South Australia, whose mission statement is to "passionately deliver experiences that help guests discover the magic of the Murray River". This family business was launched 2016 by longtime Renmark locals and married couple, Tony and Susie Sharley, debuting with the Murray River Walk which they worked tirelessly to plan and create. Its a 4 day and 3 night adventure in true wilderness, split between hiking, riverboating, and luxury night time accomodation and dining on a classic Murray style houseboat. The gentle nature of the trail and lack of hills means despite the length of this journey, any beginner trekker can comfortably traverse the terrain here. In the years since Murray River Trails opened they've recieved great acclaim and popularity for their deep passion for the river and expert guiding with a friendly touch, and now they've launched two new adventures to experience; The Murray River Safari and Murray River Escape. 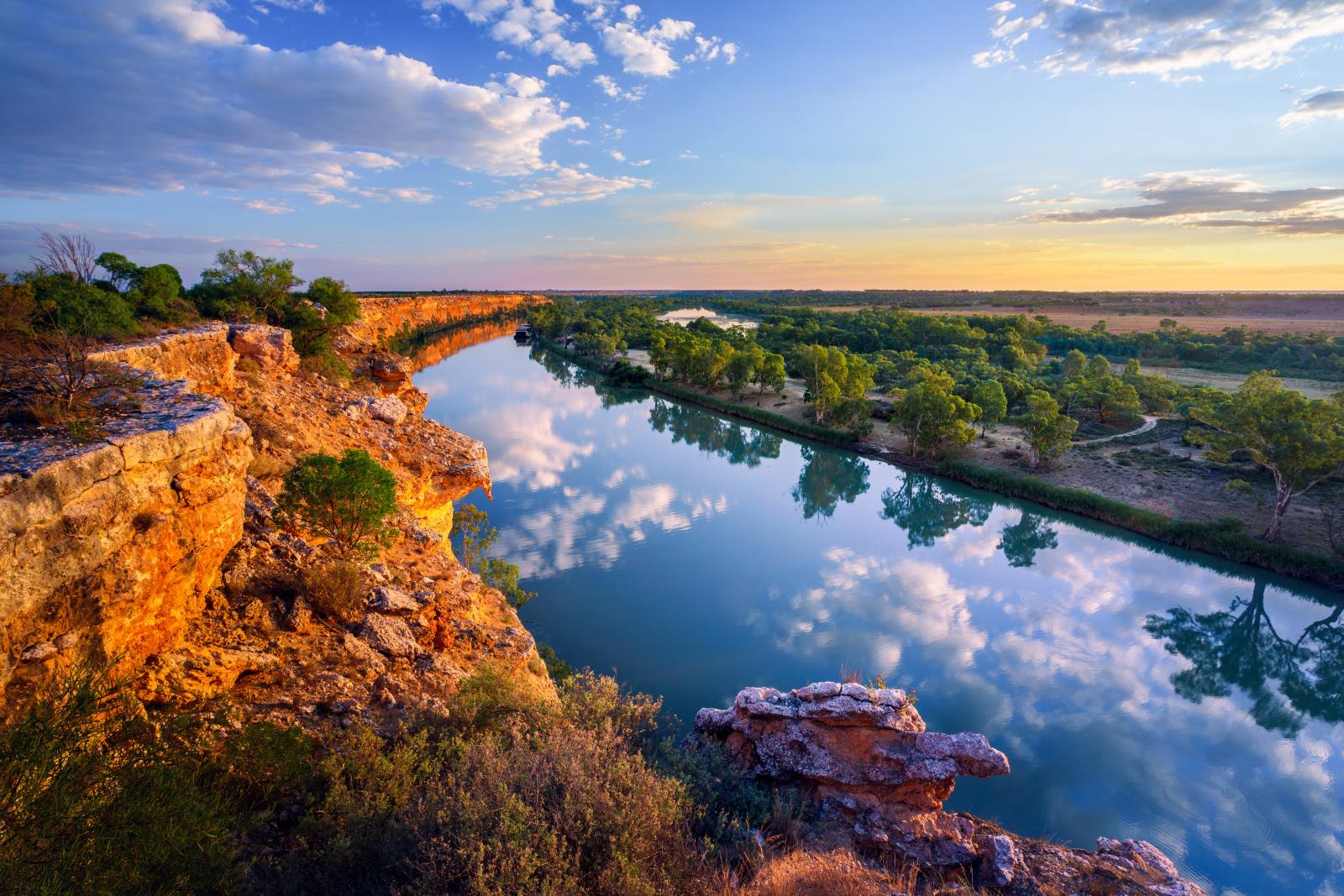 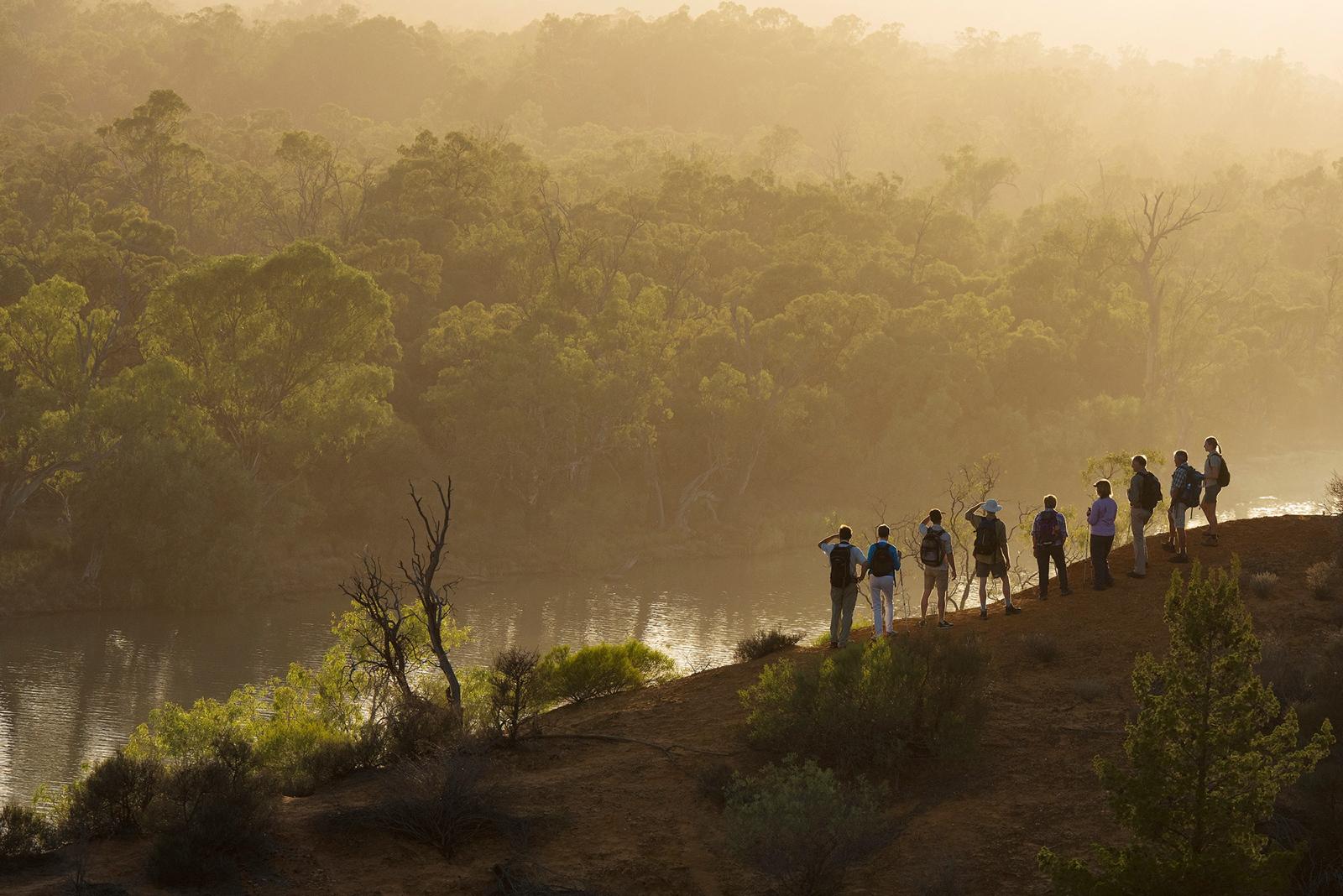 Feel the breeze at the Coorong

After 2,508 kilometres of winding flow, the Murray River finally reaches its end not far from Adelaide. Here, there's a body of water worth talking about, but for once it isn't the Murray. Welcome to the windswepted Coorong National Park, the home of the Murray Mouth and the legendary Coorong. The surrounding wilderness of the mouth where the river flows into the Southern Ocean is a sprawling wetland, and here the Murray flow floods three large bodies of wate; Lake Alexandrina and Lake Albert (colloquially called the Lower Lakes), and a far reaching yet narrow lagoon known as the Coorong, which follows the unbroken coastline down South for an incredible 150 kilometres. This is a truly iconic place, one of Australia's greatest ecological wonders, and a matter of great reverence to the Ngarrindjeri people who have called it home for millenia. The vast extent of these shallow lakes and pools and rich islands of reed is a refuge for all kinds of species of fish and birds, from 'shelducks' to Coorong mullet to orange-bellied parrots. It is one of the best destinations for birdwatching in Australia, although one particular species is more commonly associated with the lagoon than most; the pelicans of the Coorong are its most recognisable symbol. This, they of course owe to the beloved 1964 children's novel, written by Colin Thiele and since adapted twice into film; Storm Boy, about a lonely young boy from the Coorong who adopts and raises a family of orphaned pelicans; an iconic and heartwarming story that exposed the wonders of the Coorong National Park to all of Australia. 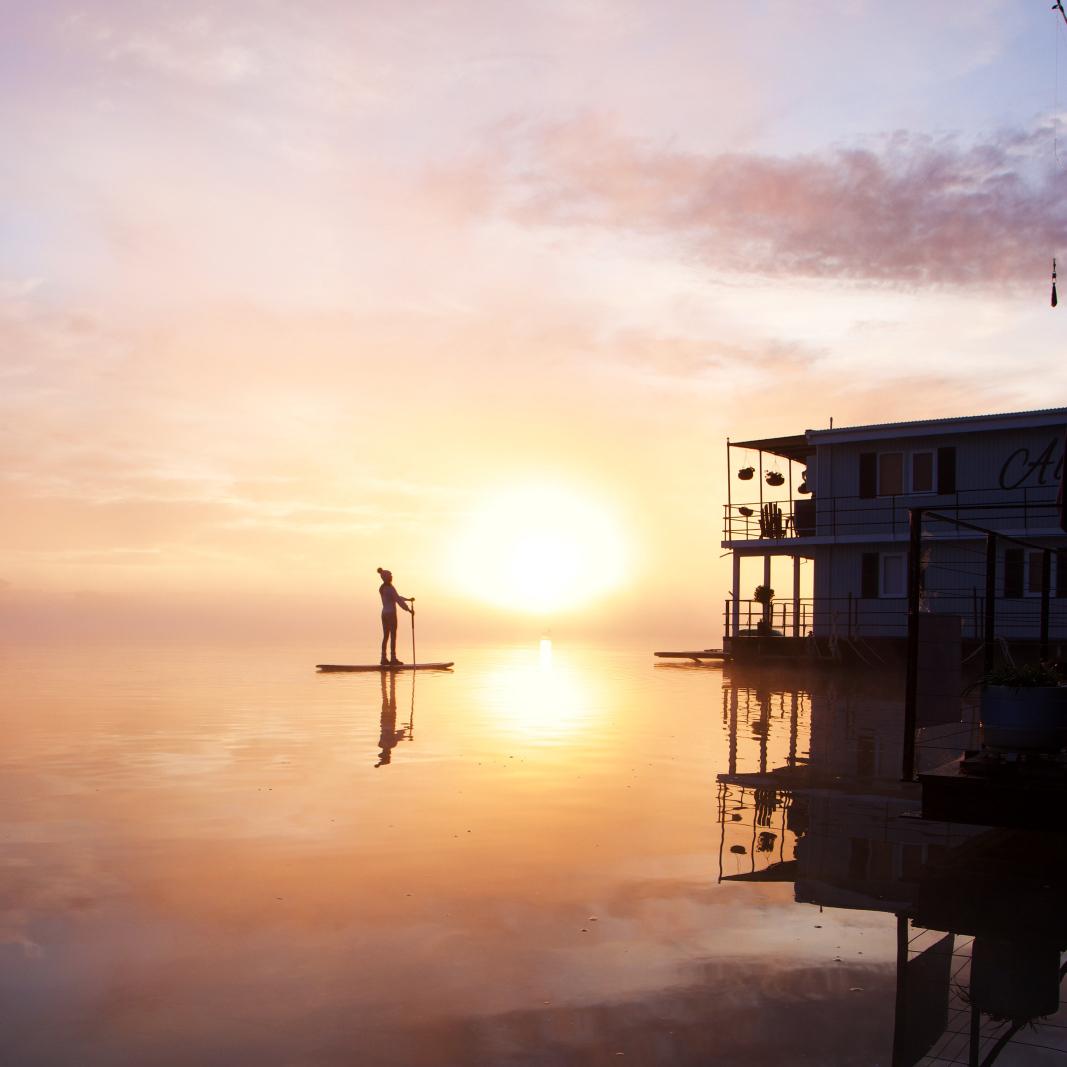 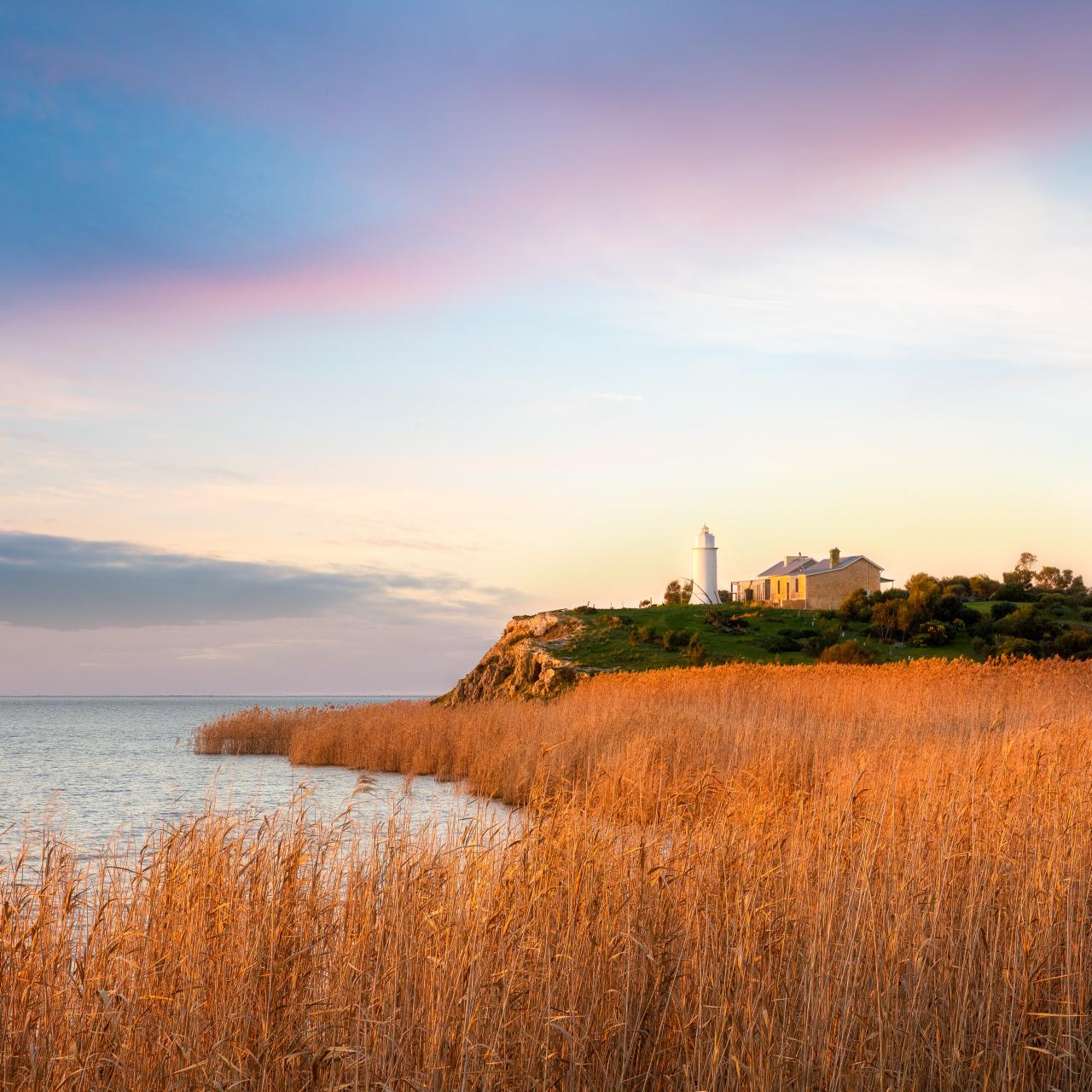 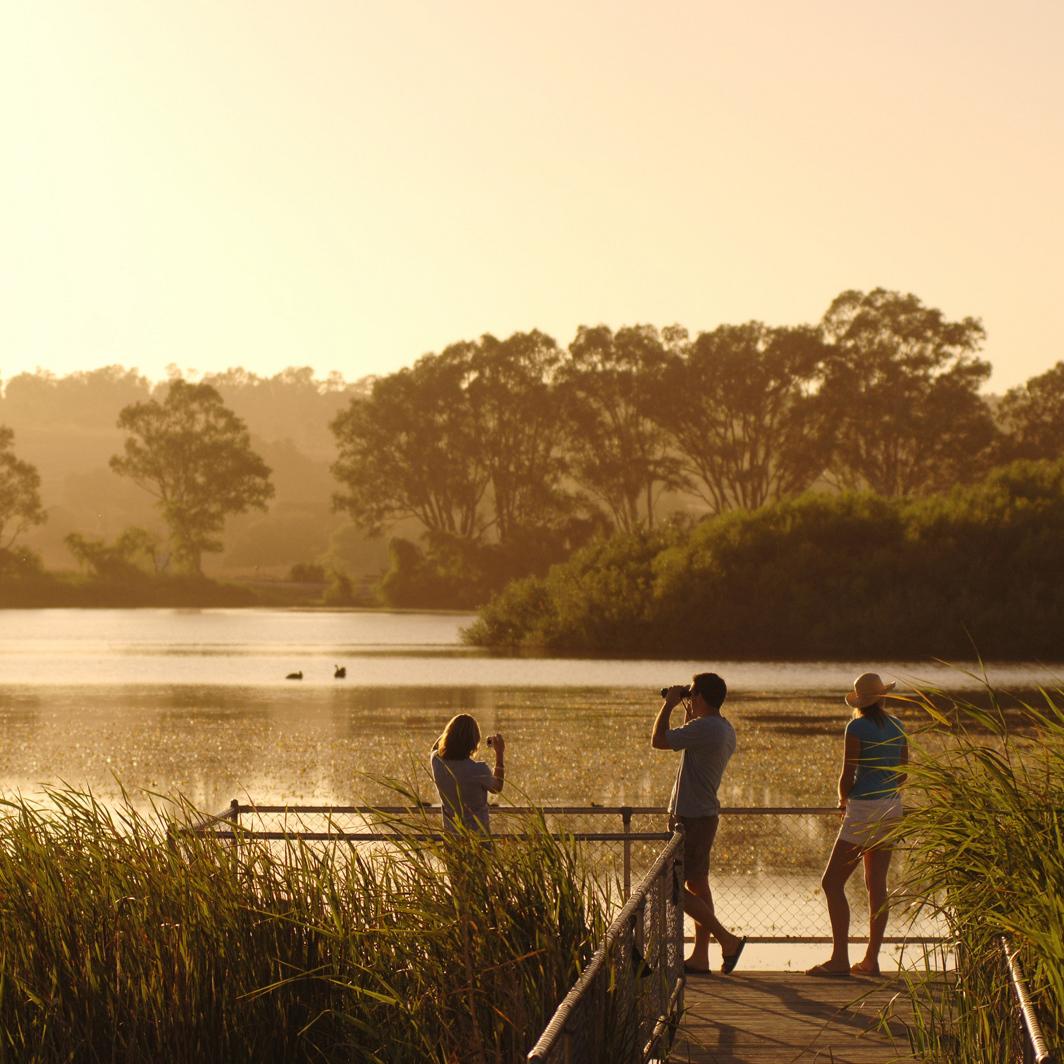 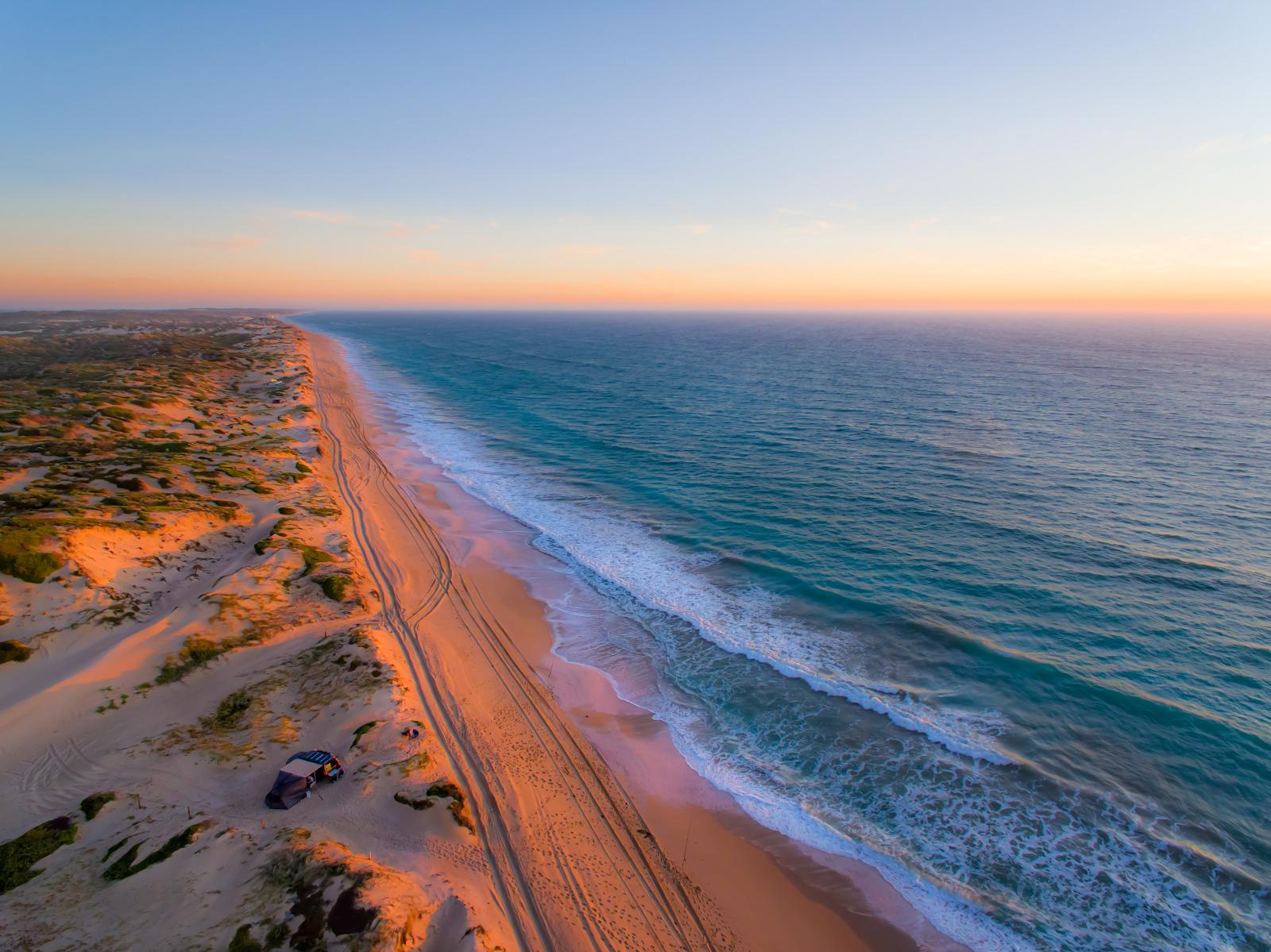 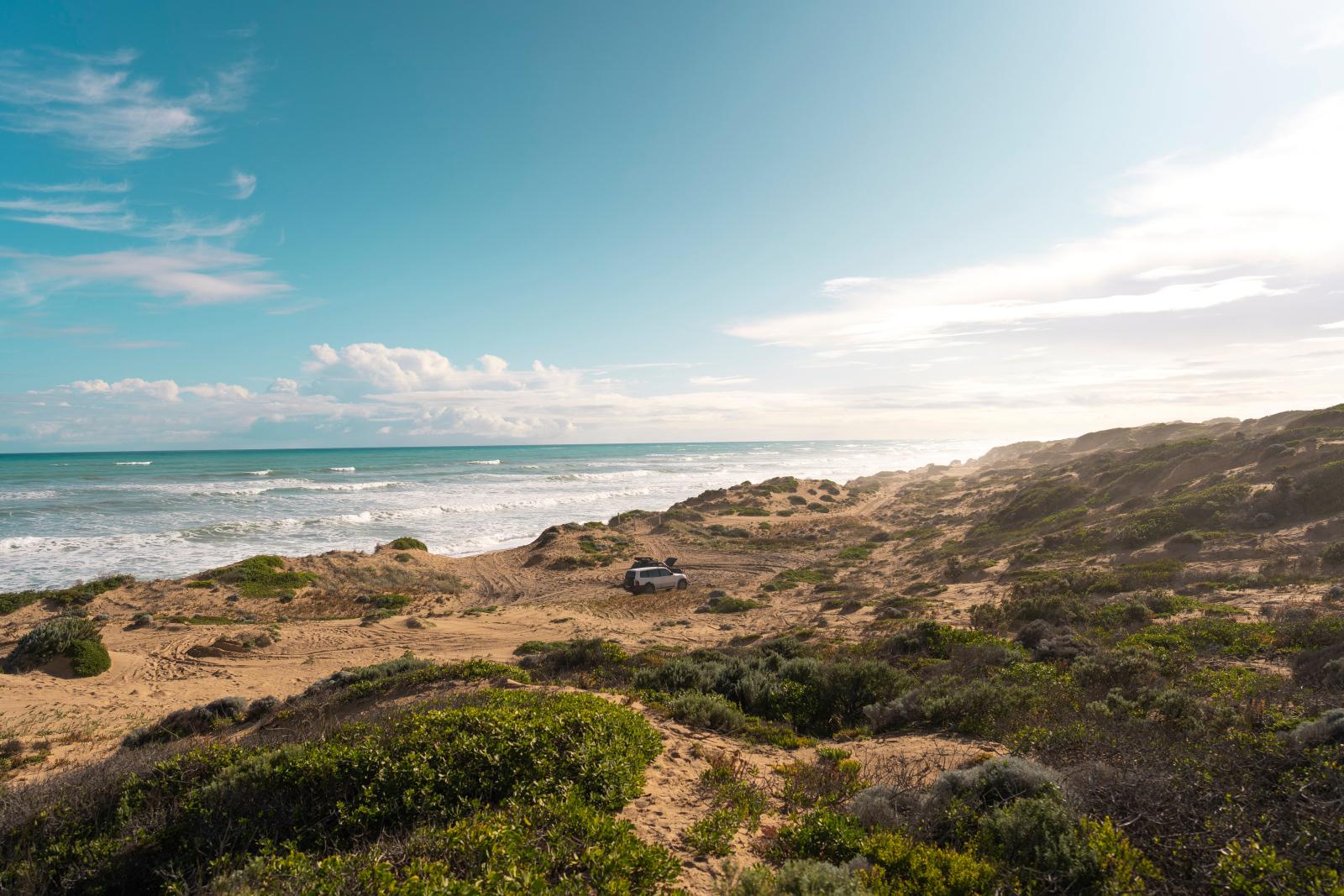 Beyond the lakes and wetlands, the beach here, which is also simply referred to as The Coorong, holds one impressive record; at an extroadinary 220km of uninterrupted sand and sun from Cape Jaffa to Port Elliot, this is Australia's longest beach. It's a sparse, windswept, and dramatic landscape along the endless Coorong coast, and the swimming waters here are wild and beautiful, with raucous Southern Ocean swells constantly crashing against the kilometres upon kilometres of grassy sand dunes. It is among the very best beaches anywhere in Australia for camping and 4-wheel driving, as there is a seemingly infinite coastal paradise to explore that inspires a real feeling of being ensconsed in a place fierce and untamed yet magical.

If it's the lakes and wetlands that interest you the most, we reccomend the Spirit of the Coorong as the best way to discover this natural wonder. Aboard their luxury river cruise boat, visitors can choose from a variety of tours offering unique experiences throughout the Coorong, the Lower Lakes, and the Murray Mouth. The highlight is their flagship Coorong Adventure Cruise; a 6 hour full day journey from the far North of the Coorong, past the Murray Mouth all the way down to Cattle Point near Narrung Island and then back again, with a delicious gourmet on-board lunch and various culturally and ecologically signifcant stops to savour along the way. 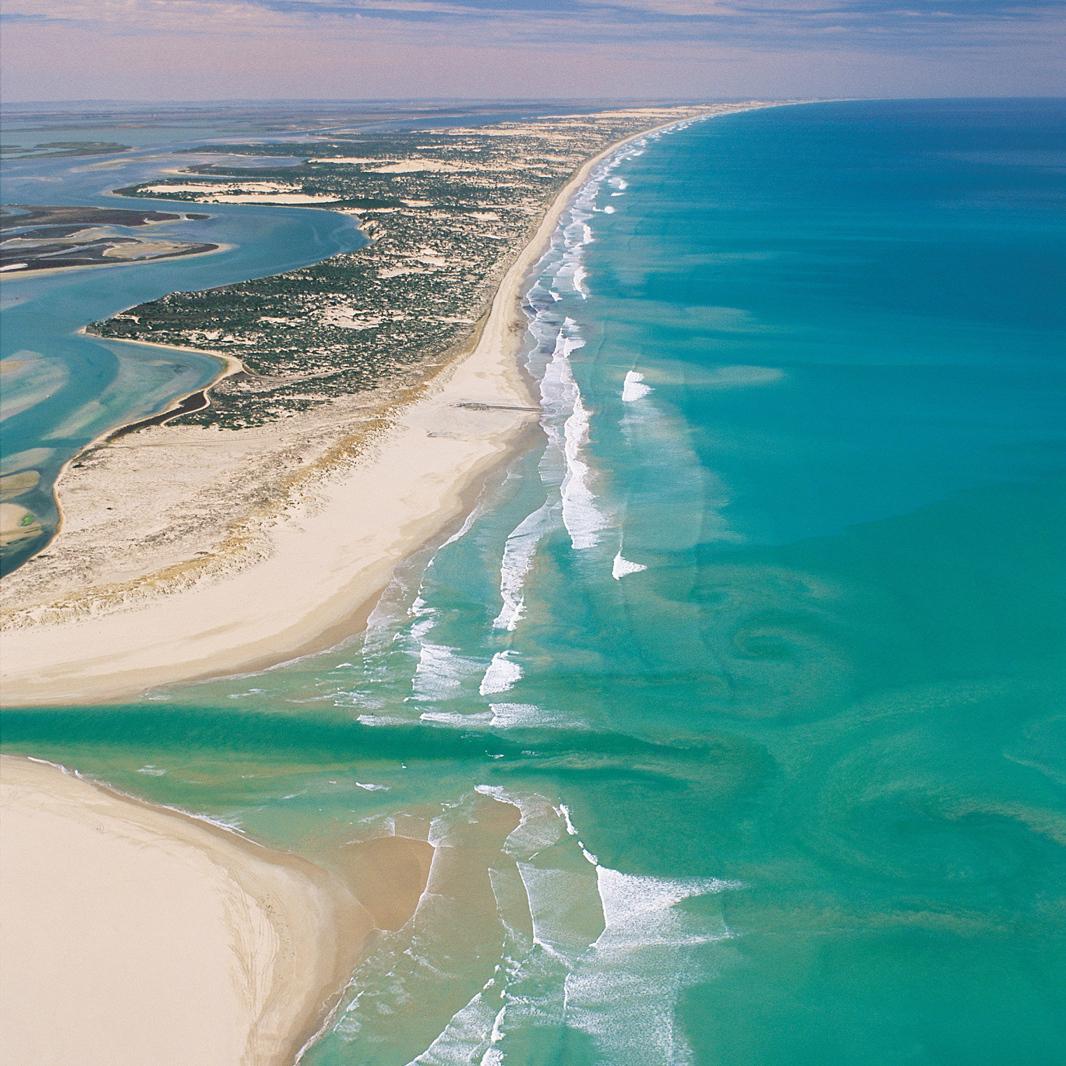 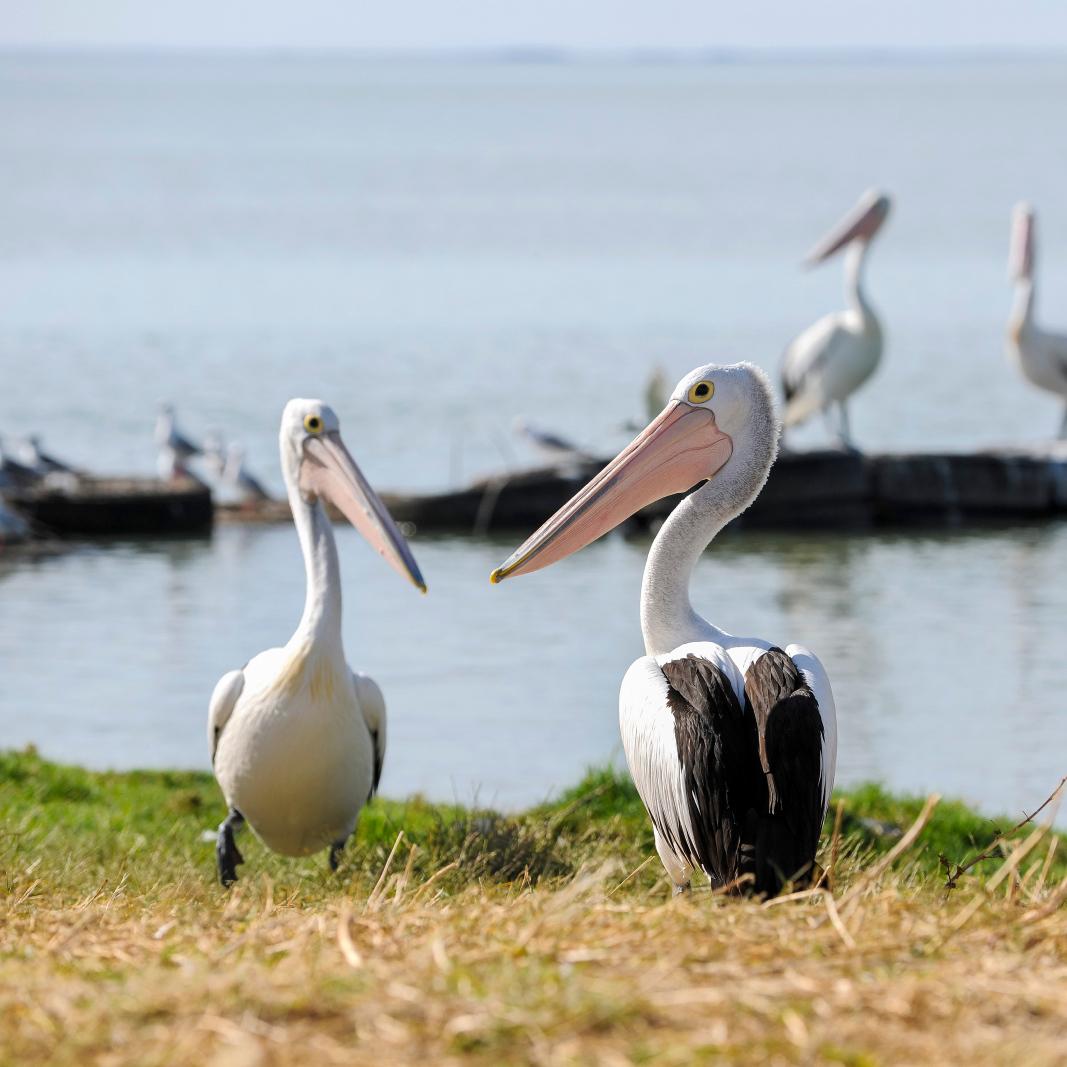 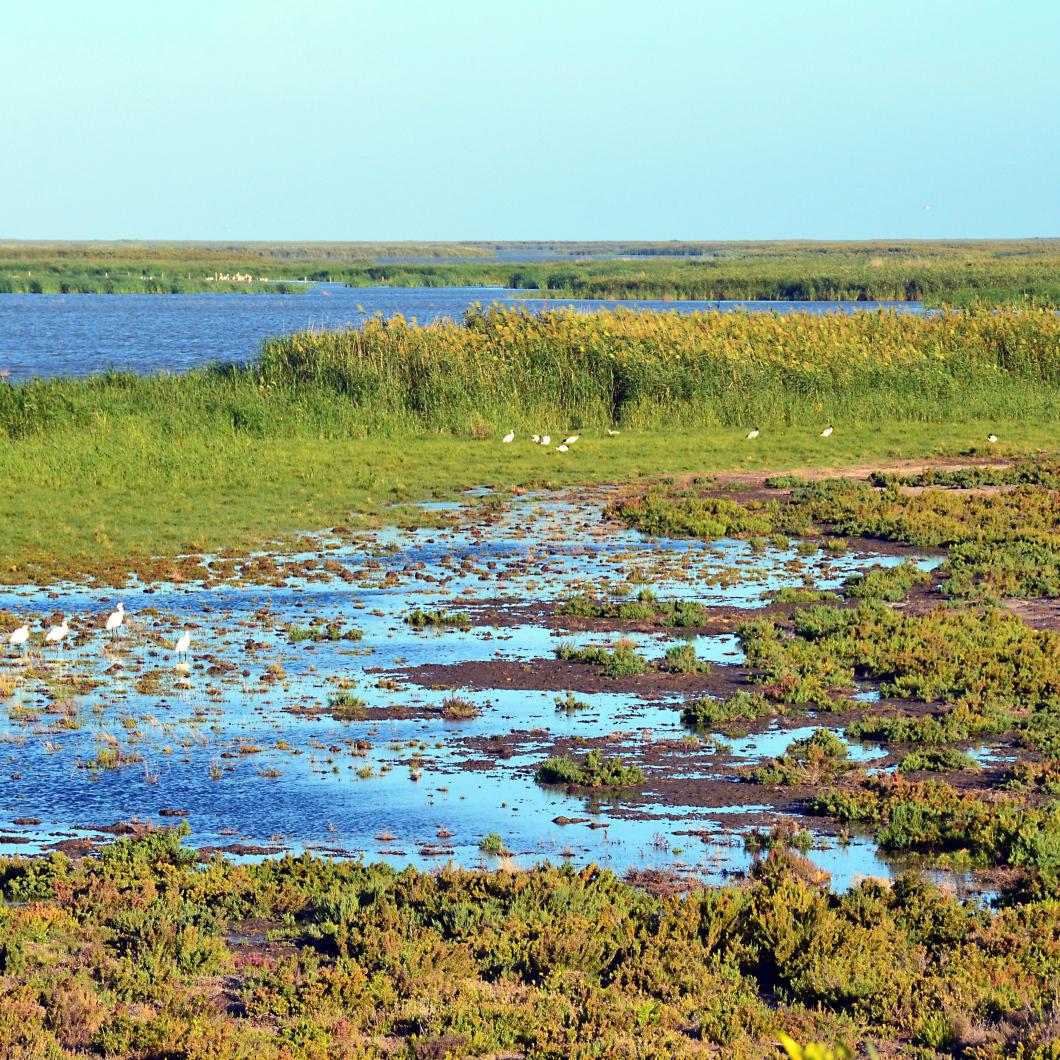 (left to right) The Murray flowing into the Southern Ocean, pelicans relaxing by the Coorong, and wetlands in the Lower Lakes Image credit: South Australian Tourism Commision & Adam Bruzzone

If you're interested in learning more about the Murray River and any of the riverside areas discussed in this article, have a read through the official Discover Murray website.